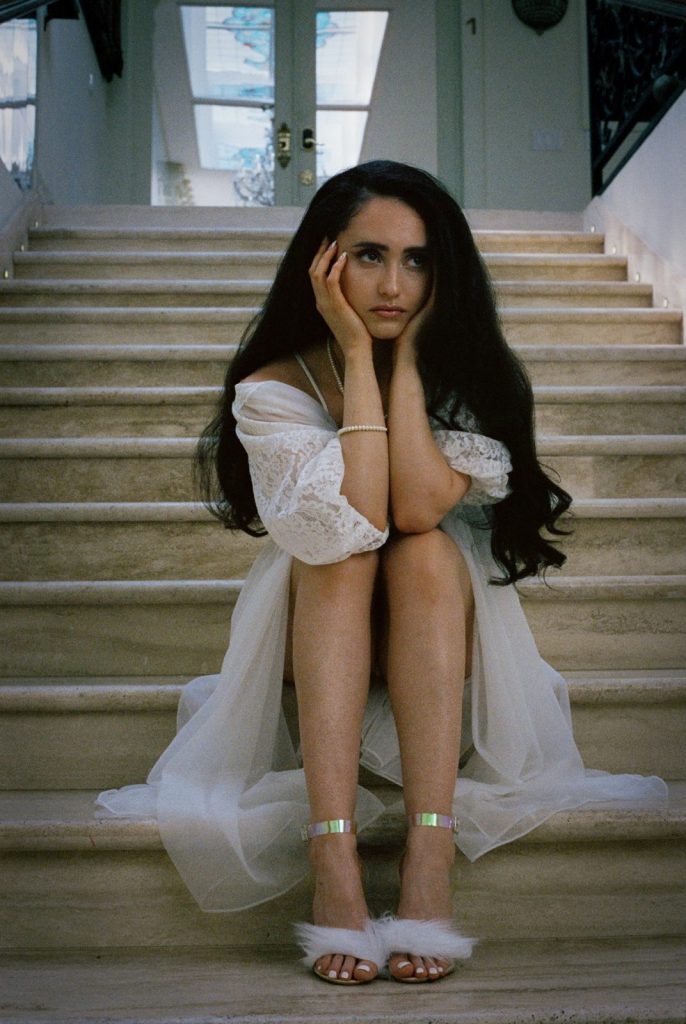 Effy is a Colombian singer-songwriter and vocal engineer based in New York City. She spent her childhood in Los Angeles, where she blossomed her sound of Blues, Jazz, Indie, Pop, and Latin music. She’s cultivated a sound that feels like you’re floating on an ocean of bittersweet lullabies.

With her single and music video, “Lost In Translation,” out now, we took some time to hear more from Effy. Read below to learn more about Effy, the story behind her single, and what’s to come.

Hi Effy! Let’s start with how did you get your artist name?

My schoolmates gave me the nickname “Effy” as a joke. They were comparing me to a character from the UK show, “Skins,” because similar to the character, Effy, I was really quiet, a little “off-the-rails,” and was sent to an all-girls private school. Long story short, I liked the nickname, so I kept it.

I was born in Mexico City, and then moved to Los Angeles. I spent most of my childhood in LA, but grew tired of the lifestyle, so I migrated to New York in 2019. I’ve been living in SoHo ever since.

I’ve been singing since forever and started writing music when I was 18 years old. I started off by making YouTube videos of me covering songs that I liked and street performing in LA. After making some friends, who were also in music, I began featuring on tracks and co-writing songs while gaining the confidence to explore my own sound. My music really started flourishing after I invested in my own recording equipment. Throughout the years, my friends in the industry, supported me so much and taught me how to record, use Ableton, vocal engineer, etc. Without them, I don’t know where I would be.

Yes, most definitely. Childhood was a little difficult for me since I was training as a professional figure skater every morning and day after school, and there were many problems at home. I found all of this very stressful, so often I’d neglect my schoolwork to learn music on my own since it was the only thing that made me happy. I didn’t have much time for friends, so I stuck to reading books which helped me excel in literature and is probably why I like writing music. I developed a bit of a rebellious streak in high school, and I still like to express that part of me with my lyrics. I think I’ve always known what I wanted from a very young age, and I’ve never let anyone tell me otherwise.

My sound is soft and sweet. It ranges in emotion, though staying close to its melancholy foundation. It’s music you can slow dance and cry to.

I like figure skating, reading, acting, and baking. Other than falling in-and-out of love, traveling to different countries inspires me to create. I also love expressing myself through fashion, creative photo shoots, TikTok, and YouTube videos.

I grew up listening to a lot of Avril Lavigne, Lily Allen, The Pretty Reckless, Paramore, and Lana Del Rey. I had other favorites, but I feel like those artists made a huge impression on me.

I absolutely fell in love with producing music videos, and I want to start my own production company. Also, I can’t wait to start touring because I love traveling and performing.

Now onto your release, “Lost In Translation.” What inspired this song?

The song was inspired from romantic memories spent in Tokyo, Italy, and Los Angeles. I wrote it for my past lover as my way of saying: “Hello, this is how I’m doing now, and this is how I remember you. I hope you like it.”

What is “Lost In Translation” about in your own words?

In essence, it’s a love letter reminiscing in the darkness, the beauty, and the rebirth after love.

How did the music video for “Lost In Translation” come about? What was your vision for the video?

My friend, Connie, owner of Costanté Jewelry, called me and proposed that we make a music video collaboration with videographer Monique Gardner, aka WeirdAndSkinny. When I released my EP, “Lost In Translation,” I started daydreaming about the storyline for a music video. Connie had the vision of a singer on stage covered in jewels, and I just looked to my lyrics to paint the rest of the story on camera. I called up WeirdAndSkinny, and we immediately got to planning. I wanted each look to portrait the lifestyle and contrast of each chapter in this story, including a look into the past, present, and future.

What message do you hope fans take away from your music and from “Lost In Translation?”

This is a difficult one…I mostly write about love, and I fall in love with people that I shouldn’t. So, I’m not sure I have the right idea. I hope fans don’t feel the same way that I do, but I know some of them do. I thought the love that I wrote about in “Lost In Translation” had saved me, and I spent most of my time in that relationship feeling like I didn’t deserve it. This life was so sweet on paper, and yet the reality of it, was that it was so painfully gray, but I was naive and tired. So, I let my own dreams go, and I let someone else’s idea of what I should be like takeover. I ran away from myself, and by the end of it, I was so hopelessly devoted to the person that I was pretending to be and it still wasn’t enough. I was so terrified to leave that relationship, and yet today, I’m afraid to think of what my life would have been like if I had stayed. It took me a couple years to come back to reality, and now I’m even more Effy than I was before. I’m sure there are a lot of lessons here, so whatever you take from it, I hope at least you can know I understand.

Some of my work has been used in TV shows, movies, and ads, which is so surreal!

Learning to be independent and pushing myself even when I felt discouraged have been the best lessons thus far. It took me a lot of practice and dedication to get comfortable with my songwriting, especially because I’m a perfectionist. I always felt so nervous in a studio surrounded by other talented artists, so learning how to record and engineer my own vocals gave me the space to freely express myself.

Right now, I’m working on a few features and releasing some singles in the next few weeks. This year has already been so transformative for my music career, and I can’t wait to share all that is to come with you all.

Before you go, let’s ask you a couple random questions:

What are your simple pleasures?

Breakfast in bed, gifts, true crime shows, cuddling with my puppy, Japanese food, soy lattes, meditating, being out in the ocean, baby piglets, Erewhon, and shopping.