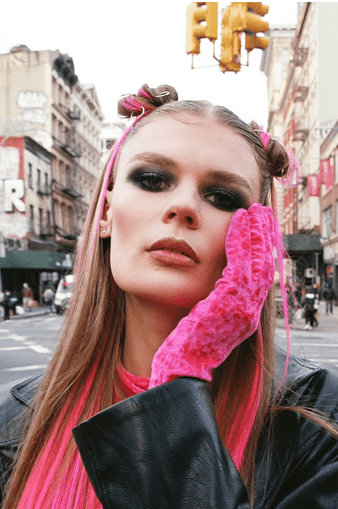 February 22nd, 2022 – New York-based, boundary breaking artist Majorlilkween, the creative alter-ego of model Alexandra Elizabeth Ljadov, has today released her most personal song yet, “ten 22”. The track is the first of several new releases due out later this year.

Also released today is the official music video for “ten 22”. Directed by Modern Day Auteur, the eerie, Wes Anderson-inspired visual finds Majorlilkween awakening into her own technicolored nightmare. It’s a surrealist take on personal struggles with mental health that finds the rising alt-pop “kween” morphing into her own sleep paralysis demon. Clad in pink latex, naturally, we watch a demonic Majorlilkween strutting her stuff amidst an industrial hellscape.

Under the creative direction of Majorlilkween herself, the visual is designed to highlight how powerful our minds truly are. She shares “Oftentimes I wonder when we are experiencing these crazy nightmares, is something greater than us taking control of our bodies or is it just our mind playing tricks on us and making it all up? So I really wanted to explore that visually.”

With its dreamlike, acoustic pop opening that accelerates into a hard-hitting crescendo with rock instrumentation, “ten 22” marks a new chapter of sonic exploration for Majorlilkween. “ten 22” is not only a turn from earlier material that channeled menacing trap cadences, but it’s also an honest and powerful reflection on mental health. Written shortly after an intense panic attack, the song delves into Majorlilkween’s experiences with anxiety, depression, and dealing with grief, after losing her father in her teens.

“This record is really transformative and special because it’s also the first time I’ve used real instruments and really explored music outside of my comfort zone. I think what I was going through at the time created a beautiful piece of art in the rawest form. I’m excited for people to get to know me on a more personal level, since I have never really spoken about my struggles with mental health publicly” – Majorlilkween

Alexandra Elizabeth Ljadov has been writing and releasing music under her musical alter-ego Majorlilkween since 2019. The multi-faceted project is the product of Ljadov’s bold creative vision. One that captures an endless roster of influences, from iconic Y2K pop and modern hip-hop, to the visual storytelling of some of the iconic designers she’s modeled for.

About Majorlilkween:
Born an outcast in Tallinn, Estonia, Alexandra Elizabeth Ljadov moved to NYC to pursue her fashion career at the age of 16. In under a year of moving to NYC, Alex was dubbed Victoria Beckham’s muse and walked over 80 fashion shows in a 12-month span. In the years following her arrival, Alex has had to create two very different persona’s; one to uphold the work she does with many different couture brands and another that embodies the NYC ethos, much of which categorizes who she is on a personal level. Her passion for music, performance, and directing videos paired with her “I do whatever the fuck I want” attitude lead to her hip hop/pop star persona, Majorlilkween.