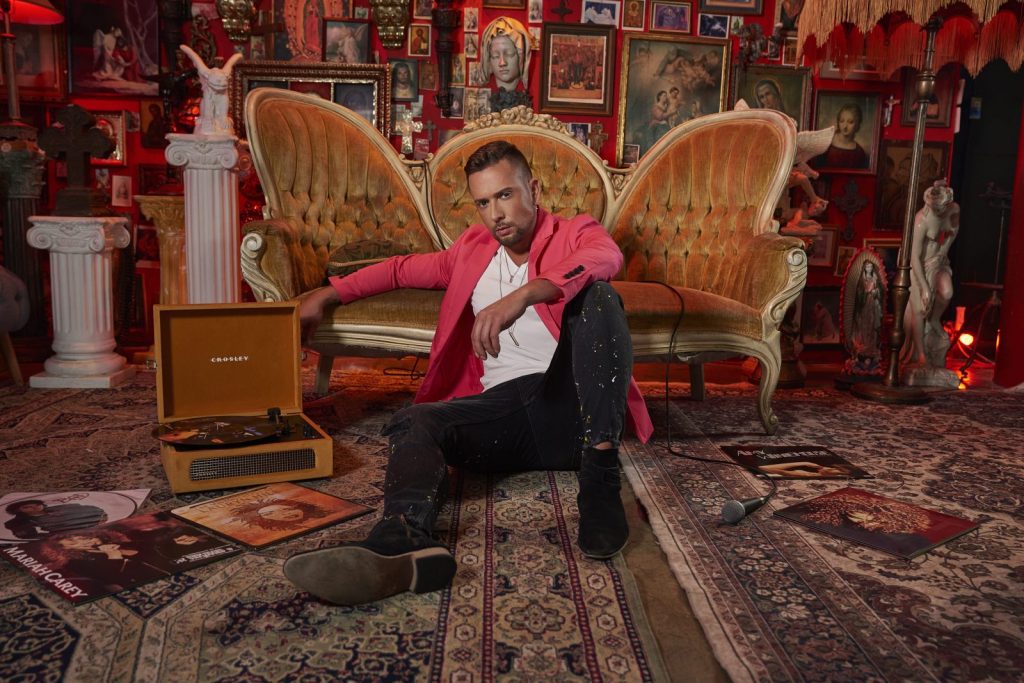 David Hernandez knows that having a positive body image isn’t always easy, but it’s a goal worth working towards. “I think I’ve definitely gained more confidence with my body through the years. I embrace my flaws and also my strengths. All of it helps to build who I am. I think growing up feeling different and bullied added to my insecurity going into my adult life. Kids can be really mean and some of that stuff just never leaves you until you work on it. I mean don’t get me wrong, there are definite days when I wake up and don’t feel my best, but I try to use the knowledge and the understanding that this too shall pass and that tomorrow I know I’ll feel different. And also, you are the one that stares at yourself every day. Not everyone gets to see that much of you so they don’t really see the things you do and the way you pick yourself apart. They don’t notice your ‘flaws,’” he points out.

He eventually realized that the only solution was complete and total acceptance. “I think the natural progression was to become more confident because the alternative was to become more miserable. And I very much prefer the former. You really just have to get comfortable with who you are in your own skin. Sure, there are things that we all want to fix, but guess what? Here you are and this is what you have to work with and at the end of the day, it’s a beautiful vessel. So, deal!” Like everyone, he still has moments of lingering insecurity. “I’m human. Who doesn’t?! Usually it’s when I am overworked, lacking sleep or stressed that I decide to pick myself apart, which is the worst possible time. You’re already feeling vulnerable and insecure and then you beat yourself up more. I’ve just really learned to take a pause when I’m feeling that type of way because I don’t really trust the things I say to myself when I’m not thinking with a clear and healthy mind. Sometimes that little inner voice inside of me is a liar and not always kind. So I need to recognize him and the difference between that little insecure guy and the grown ass man I am. The grown ass man should always supersede any less than worthy thought the little kid has.”

David’s new EP, Don’t @ Me, is a triumphant celebration of this growth through a raw exploration of his past. “It is definitely my most vulnerable work to date because I was willing to address the things that happened to me on American Idol and in my life growing up queer. I was just honest and vulnerable because I think that that’s what I like to hear in other people’s music. We all know that life isn’t always perfect and to hear somebody share that same sentiment makes you feel less alone. I also talked about my relationship, which I never really do, and how it’s not perfect but we continue to grow together. I recorded it in a little more than seven days. I self-produced it. I also collaborated with my producer and engineer Push Kahlon. I co-wrote a few of the songs with my good friend, Trent Park (who is amazing), and did the artwork with Noel Photo Studios and Brady Kerr. So, it was a small team but we were mighty! As an independent artist, we got a lot more accomplished than some people with big budgets. I’m super proud of it.”

It’s real and unapologetic, a tone best exemplified by his decision to release a book of nude photography along with the EP. “I just wrapped a six-month residency in Vegas starring in the off-Broadway hit musical comedy, Naked Boys Singing. That experience really made me super comfortable with my body. During that residency, I set up a photo shoot with a highly recommended photographer, Noel Photo Studios. The photo shoot was amazing and he made me feel super comfortable with my body. Truth be told, I had never seen myself shot in that way and it gave me a confidence that I have never had before. I think there’s a lot of shaming that comes with being a gay man and showing your body. I’m out here to break down those walls and ceilings because I think it’s ridiculous. I released a very tasteful and sexy nightstand/coffee table book. Proud of that too!” The book brings his professional arc full circle after his early career was jeopardized by him being outed and publicly shamed for working as a stripper. “I think there’s some definite irony there. The very thing I was shamed for, 15 years later I came back around to do, but in a professional setting and all while using my voice. I have love for any profession. If you’re out there working your ass off and hustling to make ends meet, I have nothing but respect for you. I do think that some of this EP and my current projects do give a giant middle finger to some of those people that have publicly shamed me throughout the years. But I am not bitter. This is just me owning who I am and taking the power back.”

Don’t @ Me covers a broad spectrum of deeply personal topics. “I touch on a lot of things on this record. Addiction, insecurities, mental health, public shaming, relationships, and sex. I also talk about past traumas and how they’ve molded me. I think the most shocking thing to people is sex because for some reason, even at my adult age, it’s still taboo to talk about some things out in the open. But I don’t really subscribe to that ideology. I think if we’re all being honest, we all have sex and when age appropriate, it’s healthy.” David’s sense of peace and self acceptance is invaluable. “We all have our bad days, but some of the things that I used to beat myself up over, I no longer do. I think only time can really tell how the decisions you made today affect your future. So far, I’ve seen nothing but growth and love for myself. I’m really happy with those decisions and at the end of the night, I can sleep well.” He wants to extend the same feeling to his fans. “I hope that all different walks of life can relate to this EP. I hope that there’s a song on there for every mood that you’re in. But what I really hope is that you learn to love yourself.” David is here to remind us that self-love is by far the most important gift we can ever give ourselves.