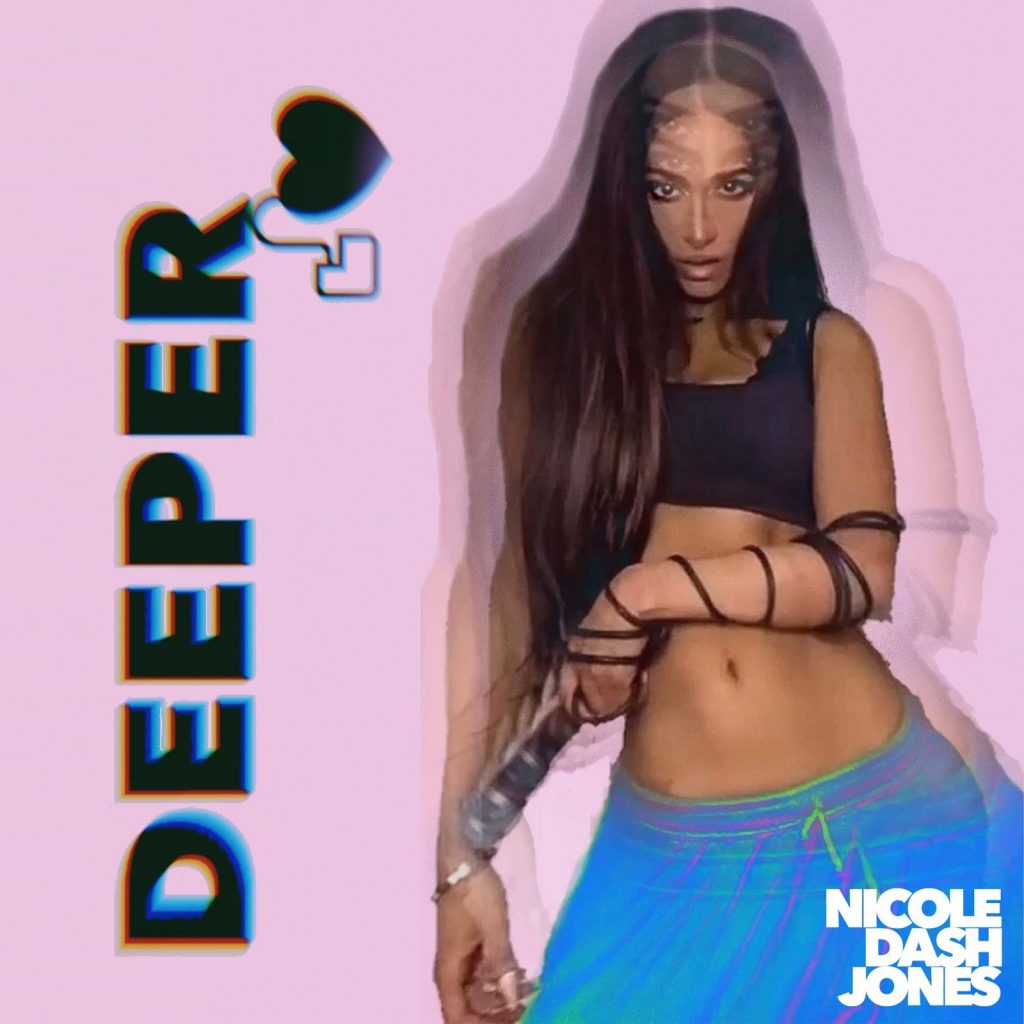 Born in London and raised in L.A., multi-instrumentalist, singer-songwriter Nicole Dash Jones fuses 80’s cinematic soundscapes with classic Pop songwriting to deliver nostalgic, dream-like Synth Pop anthems inspired by the kind of soundtrack you would find in a John Hughes movie. Following up from debut single, “Lego,” Nicole introduces her second single, “Deeper,” an uplifting melancholy Pop/Dance track with a production focus intended to bring power to sadness thematic in her music. As an artist, Nicole delves deep into human emotion on metaphysical levels, often cryptic and philosophical which to some degree extends outside of the realm of romance, but rather the facts of life, loss and the acceptance of God’s plans whilst finding peace and happiness with the world and the people in it. The chorus suggests love transcends all, and if you truly love someone, you’ll ultimately feel a spiritualistic connected bond to them for eternity. Nicole experimented with different vocal elements on the record, so there is a sad tone, but also an empowered vulnerability whilst owning herself without any limitations.

Nicole has written and featured on various dance records including KC Lights’ “Change the World” and M’Black’s “Heartbreak,” plus numerous collabs and releases on labels ranging from Mau5trap, Anjuna Beats, and 9T90 Records – a label set up by Nicole and Samuel Hills to release Dance records by Hills + Dash. Nicole’s new album will drop in early 2022 on AWAL.

With her single, “Deeper,” out now, we took some time to hear more from Nicole Dash Jones. Read below to learn more about Nicole Dash Jones, the story behind her latest single, and what’s to come.

Hi Nicole Dash Jones! Let’s start with how did you get your artist’s name?

I was reborn with it.

Originally from L.A. and currently based in London.

I first tapped the creative vein as a songwriter at 13 on my piano. I was always much in isolation as a kid with which came the singer side. I often shied away from, yet I ambitiously pursued a career from then onwards knocking on label doors, playing London’s underground club circuit, writing songs for other artists to performing on dance records for DJ’s.

I could’ve really been anywhere in a car, on a plane, taking a walk, and mostly just sat by piano and tap into this world where I felt I could access another universe whereby melody and lyric would download into my psyche. Much of my 80s-esque inspired musical sound comes from what I personally draw from the intricacies in classical composition; an area of music that I trained in from 3 years old. Later, going on to listening to anything that I could get my hands on that inspired a certain level of personal satisfaction from groundbreaking pioneers in electronic music to the grunge movement to record producers from Dre to Quincy Jones and artists from Fleetwood Mac to Michael Jackson who for me display such profound musicality that continuously inspire me no matter how many times I listen to them.

Every song that I write I feel different about, but there is always this looseness that comes with being a singer-songwriter whereby I try to allow that authenticity to filter through during the production stages. My sound is my tonality and melody, and I am slightly abstract in terms of my lyrics; however, I try to piece together all the additional musical elements down to synth chords, drum patterns, guitar/bass movement and carefully construct with my producer, Samuel Hills, into my vision of dream-like Synth Pop (some say a female Weeknd), a vibe where I feel my listeners will know exactly what I am thinking – I like to break everything down until it’s most authentic in a delicate and precise way whilst still containing my vulnerability.

Remaining creative is intrinsic for me, it’s very much about the challenges I set for myself as a human being and as an artist; right now, I am writing the rest of my album, and I can go from intuitively knowing a song is really, really up there, but unsure if it’s perfect which can send me haywire. So, meditation/ashtanga yoga is a hobby I guess to feel connected/grounded. Outside of music, I’m very entrepreneurial which for me is this harmonious balance of two worlds where I allow my ambitions the opportunity to three-fold, and then leak into the sphere of my artist self which I feel exceptionally close to – despite the two worlds being wildly contrasting both are very much at the core of my being.

My influences change all the time, each week I listen to something new. I am very much indulged in early 90’s grunge now from Deftones to Silversun Pickups to Radiohead. Yet, in terms of my central artistic references, I will always retreat to classic artists from Fleetwood Mac, David Bowie, Michael Jackson, Tears for Fears, John Lennon the 60’s and early 80’s film scores.

Now onto your release, “Deeper.” What inspired this song?

Honestly, I was just at the piano, and it rolled out. Often, what I have difficulty processing emotionally in the real world, I have no problem expressing musically. I guess it was just what I was going through at the time, and I was able to just captivate the rawness of that temporary disposition.

What is “Deeper” about in your own words?

I consider the record a homage to the transience of love and a tribute to holding on to the feeling of what’s been lost over time whilst desperately trying to salvage my identity. I was overwhelmed by thoughts, others mortality, and my own, but I also found fleeting beauty in carrying this weight of sadness to rescue myself at the time with which came a profound elate happy/sadness. This track is about these two different sides to different sides of love and loss, almost an evacuation of the weight on my spirit, and at the core, love coming together to save us.

What is your favorite lyric in “Deeper” and why?

The opening line, “Someday you will die before you look back,” as abstract as it appears, it’s my own way of saying to myself to be present and grateful for life because someday if you’re fortunate enough to have the opportunity to look back, that you didn’t miss the beauty of the moments life offered you whilst you were too busy living in the future or the past.

What message do you hope fans take away from your music and from “Deeper?”

We are always continuing to know ourselves which often comes in glimpses, perhaps 3 minutes of a song that sticks with you for years, people that come into your life, those you loved and lost, circumstances, chains of events – a million variables. My message is always the same, to embody the moment, to feel what you gotta feel, and don’t be afraid to be vulnerable in that moment because whatever is good or bad will always pass – nothing is forever.

Creating this body of work – the album which I will release this year.

Be true to yourself, nobody is going to do that for you, only yourself.

I will be releasing my 3rd single around March/April.

Before you go, let’s ask you something random. If you could choose anyone, dead or alive, who would you have dinner with and why?

Philip K. Dick because I have so much to ask him about his writing which has always inspired me.