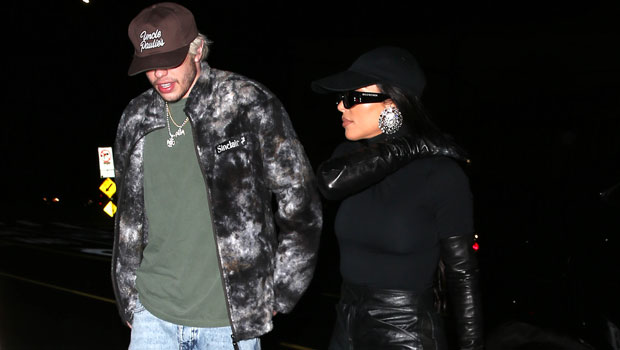 Pete Davidson‘s romance with Kim Kardashian has been heating up over the last six months — but fans are already wondering if the SNL star will appear on the family’s new Hulu show, The Kardashians. While season one has wrapped (with some mentions of Pete in the premiere), sources tell HollywoodLife EXCLUSIVELY that the actor is “contemplating joining” the docuseries.

“Pete is contemplating joining Kim for the second season of The Kardashians. The door is open for him to join,” the insider spilled, noting season two has not yet began production. Notably, the family signed a two-season, forty episode deal with Disney-owned Hulu — with the first episode having dropped on April 14. Pete also walked the red carpet with Kim at the premiere.

Kim and Pete hold hands at the premiere of ‘The Kardashians.’ (BACKGRID)

“They have not started filming season two yet and it would, obviously, require some paperwork, as [Pete] would be paid for it. Pete did not film for the first season, but he is mentioned throughout the season,” the source explained.

The first episode of the series appears to pick up in September, shortly after Kim was asked by SNL showrunner Lorne Michaels to host the show’s October 7 episode. At the time, Kim is already mid-divorce from ex Kanye West — but reveals she had met Pete Davidson at the Met Ball that month. The 28-year-old actor, per Kim, told her that if she could “read cue cards” she would be “fine” hosting the sketch show.