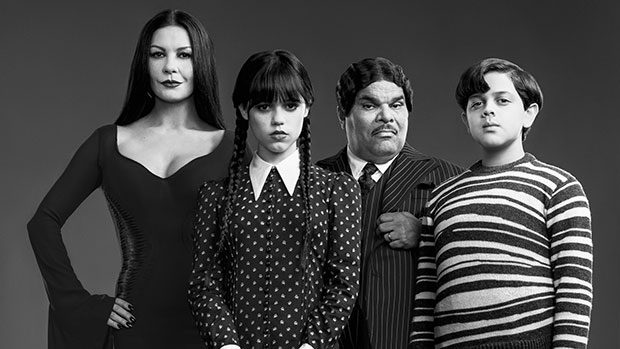 Wednesday is going to take wicked to a whole new level this Halloween. Jenna Ortega is taking on the beloved role in the new Netflix series, and Wednesday Addams has lost any of her bite (literally). A new featurette, released on August 24, features the cast and crew breaking down what to expect in the highly-anticipated series.

Wednesday, like the rest of her frightening family members, was created by cartoonist Charles Addams for illustrations in The New Yorker, starting in the 1930s. The Addams Family has been adapted over the years into countless media projects, including the ’90s film franchise that featured Christina Ricci as Wednesday. For the 2019 animated film and its sequel, Wednesday was voiced by Chloë Grace Moretz.

While there have been so many depictions of the Addams Family, none have ever focused solely on Wednesday — until now. HollywodLife has all the latest updates about Netflix’s Wednesday, including what we know about its release date, cast, and more.

Netflix revealed the main teaser on August 17. When Pugsley gets bullied at school, Wednesday plots her revenge. “The only person who gets to torture my brother is me,” Wednesday tells a group full of boys before dropping two bags of piranhas in the pool. Naturally, she gets expelled.

Wednesday is taken to Nevermore Academy, where her parents met. Her mother, Morticia Addams, tells Wednesday that she’ll “finally” be among peers who “understand” her. She meets plenty of people along the way and ultimately thinks she’ll like Nevermore.