Viola Davis As Michelle Obama: Photos & How She Prepared To Play ‘The First Lady’ 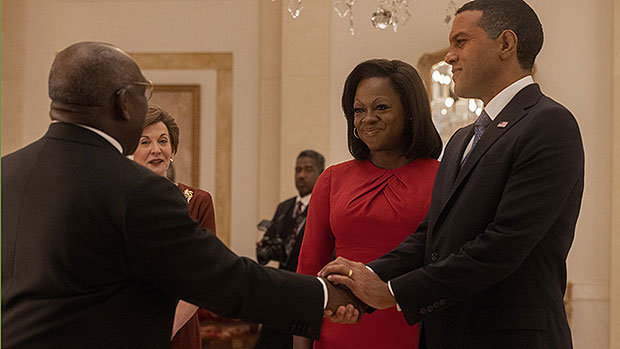 Viola Davis may be coming for another Emmy for her role as former First Lady Michelle Obama! The Oscar-, Emmy-, and Golden Globe-winning actress has already made quite the impression playing Michelle in the Showtime anthology series The First Lady, which premiered April 17.

Here we break down what went into Viola’s complete transformation into Mrs. Obama, including how she prepared for the role by working with a dialect coach, researching the deep history of Michelle and her husband, former president Barack Obama, and undergoing aesthetic and cosmetic changes for the part.

The Role Carried A Lot Of Weight For Viola

“In four years, I don’t want to look back and think, what did I become living in that house?” Michelle asks Barack, played by O-T Fagbenle, in the trailer. In terms of how Viola transformed into FLOTUS, that was a whole other kind of Becoming.

“You don’t want to insult them by your portrayal,” Viola said during the show’s CTAM panel in February as she considered how Barack and Michelle would see the show. “It keeps me up at night.” In addition, when speaking with Entertainment Tonight in April, the Fences actress said she felt the pressure to also make Michelle “look good” through her portrayal. “There’s a sort of sister bond there for me, you know that girl code like, ‘I gotta make the sister look good,’” she said.

Moreover, according to Deadline, Viola was able to speak with Michelle in order to prepare for the role. She was,