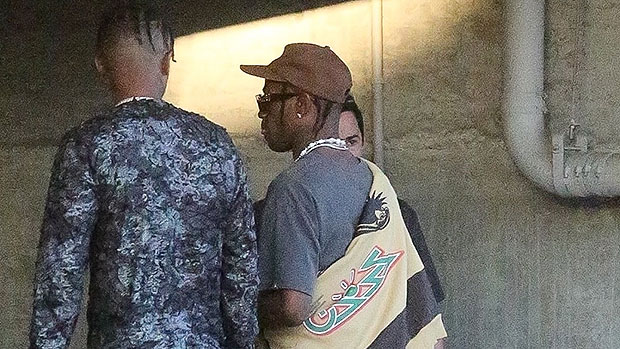 New dad Travis Scott looked casual and comfortable as he arrived at the Fanatic Super Bowl party in the first photos of the rapper since the birth of son Wolf, his second child with Kylie Jenner.

Amidst family drama piled miles high, Travis Scott looks as chilled out as ever; but then again, maybe it’s just new dad exhaustion! In the first photos of the rapper since the birth of his second child with wife Kylie Jenner, the rapper wore a comfortable outfit and statement hoodie as he arrived at the Fanatic Super Bowl party on Feb. 12. Travis and Kylie welcomed a son, Wolf Webster, on Feb. 2nd.

Travis Scott looked cool and comfortable as he arrived to the Fanatic Super Bowl party after the birth of his son, Wolf. (GIO / BACKGRID)

Travis arrived in style with his entourage to the Fanatic party, which was also attended by Quavo, Russell Wilson, and Ciara and featured special performances by Megan Thee Stallion and Doja Cat. For the event, the rapper chose luxury comfort, donning baggy white pants, a tan hat, and trendy rectangular sunsets. Never complete without his ice, Travis also wore an assortment of chains.

Though Travis seemed relaxed as he arrived at the event, apparently some of his family members have been less than pleased with his partying ways, especially alongside Kanye West. HollywoodLife learned EXCLUSIVELY that both Kylie and mom Kris Jenner have been displeased with Travis not focusing on his newborn, although Kylie has reportedly been more understanding.