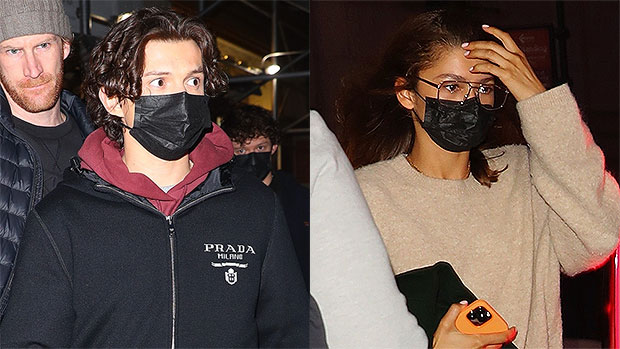 Zendaya and Tom Holland proved they’re just like the rest of us as they were spotted walking side-by-side heading to a New York Rangers Game.

Tom Holland, 25, and Zendaya, 25, have been making the most of their New York City trip and were spotted attending a New York Rangers game together on Thursday, Feb. 18. The A-list couple was spotted on the streets of NYC as they got out of their car and headed over to the game. The Euphoria star kept it casual as she wore a cream-colored sweater and white baggy pants. She also donned some glasses to make sure she didn’t miss any bit of the game and a face mask in the midst of the coronavirus pandemic.

The Spider-Man actor also sported a low-key look with a black jacket with a red sweatshirt that popped out and black jeans. Just like his lady, he sported a black face mask for protection. The couple also each brought a plus one to the game. Zendaya brought along her Euphoria co-star Hunter Schafer while Tom brought his younger brother.

The two were also spotted going out to a romantic dinner in the Big Apple on Wednesday. The two shared some rare PDA as they were spotted holding hands while heading to dinner. They both looked super glamorous as Zendaya wore a stunning black dress with a big belt that cinched around her tiny waist while Tom rocked a grey suit.