Tom Cruise Is Buff In Tight T-Shirt After 60th Birthday As He Prepares To Fly A Helicopter: Photos 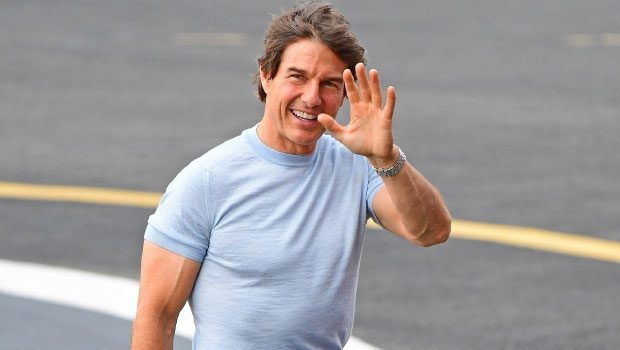 Tom Cruise was spotted boarding his helicopter and flying through Southwest London on July 15, and he looked dapper while doing so. The 60-year-old Mission: Impossible actor donned a tight light blue tee that accentuated his biceps and a fitted pair of dark blue jeans as he waved to onlookers before hopping into his helicopter. He completed his casual outfit with black work boots and held a black backpack in his right hand. He looked excited to be on board of his helicopter and gave another wave to fans as he prepared for take off.

Tom Cruise waves at fans as he walks to his helicopter in London on July 15 (Photo: BACKGRID)

Tom earned his private pilot license in 1994 and has been flying ever since. “I fly airplanes. I’m a multi-engine instrument-rated commercial pilot,” he proudly stated in a 2017 interview with Wired. He also does many of his own flying stunts for his films, such as 2022’s long-awaited Top Gun sequel, Top Gun: Maverick. “Every time you see him flying, that’s him in that jet,” producer Jerry Bruckheimer told The Hollywood Reporter in May. “You can’t pull Tom Cruise back. He’s going to do what he’s going do.” Furthermore, the talented actor earned his helicopter license just for Mission: Impossible – Fallout, per Thrillist.

Tom has been spending loads of time in London.