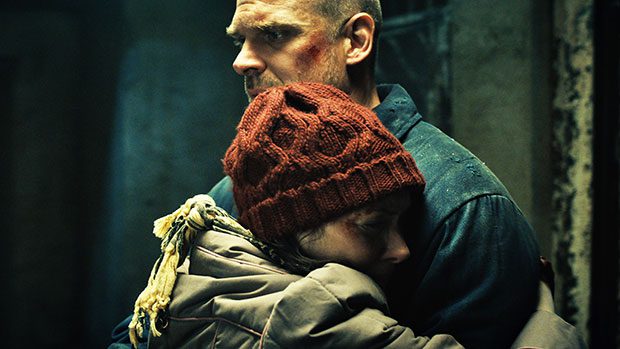 During a brief quiet moment in the midst of the chaos, Joyce and Hopper shared a second epic kiss in Stranger Things season 4. You can thank Winona Ryder and David Harbour for it. “This kiss wasn’t scripted, Winona and David added it on the day of filming,” the Stranger Things writers revealed in a July 2 tweet.

This kiss wasn’t scripted, Winona and David added it on the day of filming pic.twitter.com/9vSWwYliWU

The Joyce and Hopper reunion happened in episode 7 of Stranger Things season 4. Joyce and Murray moved heaven and earth to save their friend after Joyce received a secret message from Hopper. They rescued him from a Russian labor camp only to break back into the camp to take down the “particles” inside as the kids took on Vecna and more in the Upside Down.

In the finale, Hopper agreed to act as bait for the demo-monsters in the labor camp. Joyce was understandably concerned about Hopper’s safety. She didn’t want to lose him again. “I’m gonna die someday, but not today. I still got a date to make, remember?” Hopper said to Joyce.

“I don’t know, Hop,” Joyce replied. Hopper assured her, “This time it’s gonna be different.” She said it “better be” different because she refused to have another funeral for Hopper. Hopper sweetly caressed Joyce’s face and they kissed. At that moment, Winona and David went off-script with Joyce and Hopper.