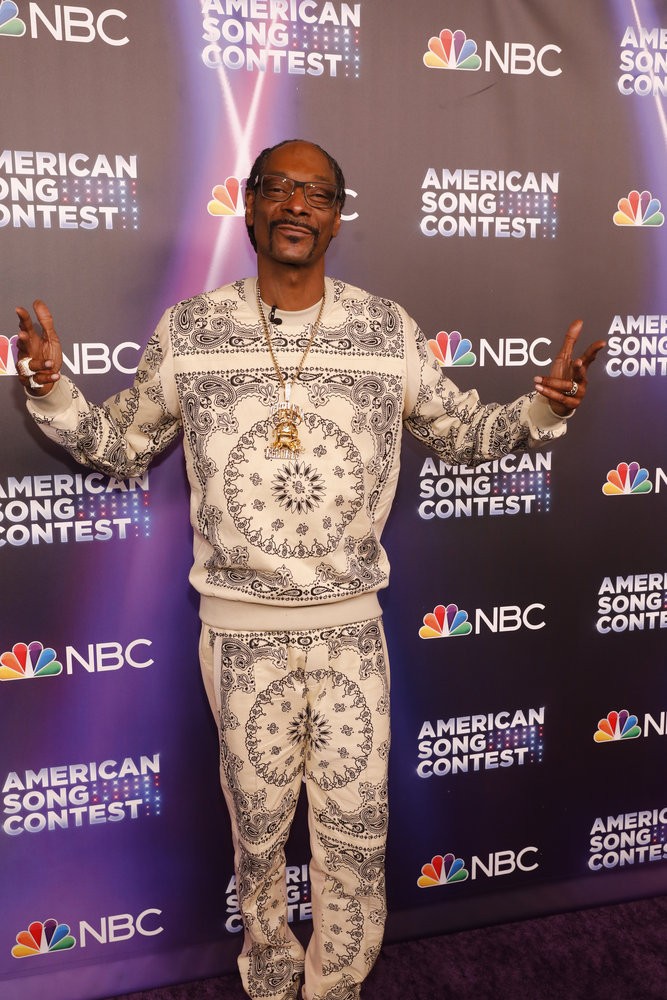 With countless accolades to his name and an ever evolving career, Snoop Dogg has never lost touch with the joy in his life. “Everything I do is fun based. So I don’t look at it as a hard job or a hard task. It’s all within the realm of having fun. You see me doing it, I’m having fun,” he explains. His latest endeavor is hosting American Song Contest, in which artists from 56 states and territories vie to capture the nation’s heart with song. He co-hosts with Kelly Clarkson. “Working with Kelly is easy. I got half the work,” he teases, smiling wryly. “She looks good. She sounds good. She’s a professional. She knows how to conduct herself in front of live audiences. She’s a great vocalist, songwriter, et cetera, et cetera. So she makes my job easy.”

Snoop was excited by the opportunity to return to his musical roots.”I started off as a songwriter, so to see songwriting still being praised and being put on a high level, it was fun for me to sit back and to watch people write their heart out or write something that means so much to them that can change the world basically. I feel like this show is about bringing people together and bringing the country together. If somebody can write a song that could bring the world together, then we’re doing some justice.” He never hesitates to offer words of wisdom, especially given the phenomenal potential of the artists who have made it to the stage. “If I see somebody that’s talented, I like to give ’em an extra boost of encouragement. There were a couple of artists that happened to show up to a show of mine because I was in their area and they came through and when they came, we chopped it up before the show. And I gave ’em a little bit of words of encouragement as far as keeping at what they’re doing, because the people on this show, basically, they got their thing together. They just gotta keep going and keep going. Because if you make it to an NBC produced show, you must be doing something right.”

To have a stellar performance, you have to cultivate an emotional connection between the music and the listener. “It’s a feeling. We searching for a feeling because the song could sound good, but if it don’t feel good, it’s not matching the intensity of the song. And a lot of times our favorite songs make us feel a certain way. So we can find people that can write that particular song that has the world feeling like it’s supposed to feel. And I feel like this is the greatest show that ever hit television because it gives the unknown. At the same time, there’s people on here that are very well known. So the competition is about who can write the best song for their state, first of all, and then the best song for the country.” There’s something about music that is truly universal. “It’s all about the feeling of the song. Like I was saying, if you can make a song that feels so good to people, no matter what they look like, where they come from, what style of music, music they’re used to listening to, if it feels good to you, it’s good for you. For example, when I DJ and I play a particular record, when I play ‘Stand by Me’ by Ben E. King, everybody in the building singing, I don’t care if you old, young, like records like that, that have some sort of sentimental value to it, when you hear it, it makes you feel like singing it and the person next to you feels like singing it and it’s just a smile on your face. It’s those kinds of records that are definitely gonna come from this kind of show because there are great songwriters everywhere.” He prefers displaying the authenticity of that reaction to the audience. “I like watching [the performances] live. Cause when it’s live, I’m getting the feeling that you’re getting, you know what I mean? It’s not fake, it’s not television. It’s actually me. So when I’m dancing, grooving and having a good time and really into it cause it’s my first time hearing it and this is the way it makes me move and the way it makes me feel. And you did a great job because you got me dancing to your song that nobody in the world knows but you and your people.”

The goal of American Song Contest is to find music that can elevate your mood and deliver that connection at its core. “I think one thing about the songs that I’ve written that have been great, you can change the background, you can change the foreground, it ain’t gonna change nothing. That song feels good to you every time you hear it. And that’s the key to this show is that we’re gonna find that one song that feels good every time you hear it, no matter what’s going on in the background or what’s over here or whatever. When you hear that song, it gives you that, ‘Mm, this the one, not the two.’” It’s a quest that transcends style. “America’s open to all ranges and varieties of music. So that’s why it’s no one particular style that’s just dominating right now. It’s not just like country music. It’s some of everything on there. And I feel like when we get down to the end of it all, then you gonna find out what song really had the most impact, [regardless of] what genre it comes from. It’s all about the impact of that record. And I believe people will cross genres to find that song that makes America feel like this is the greatest song written this year.”

The show reflects a robust American tradition of musical trailblazing and multiculturalism. “I think what the show shows is that there is so much music in these people in America. If you just give ’em a ear and just pay attention, you’ll find that it’s so many styles of music that we make, that we love, that we pay attention to, that we really enjoy listening to. And I feel like America’s always been the leader in sound and music. We’ve always been the trendsetters from the blues to the jazz, to the hip hop to everything that we’ve done. We ain’t went nowhere, we’re still here. And we finally getting the love and the respect to where the whole world globally entertains themselves with our music and they starting to collaborate with us. Cause I’ve done records with artists, from India, from Asia, from Africa, from Nigeria from Jamaica, every part of the world that you can imagine. I’ve done records with artists all over the globe and they love our music and we love their music. And I feel like this show right here is just going to show what American songwriting is all about.” Even for those who don’t end up producing America’s favorite song, there are plenty of avenues to success. “One thing I could say about being an amazing songwriter, these kinds of shows are great and there’s big opportunities, but sometimes these shows aren’t the only way in. And if you’re really doing what you’re supposed to be doing and writing great songs, there’s so many ways to get your music out now, whether it’s through Spotify, through YouTube, through these different apps that allow you to upload your music, it’s a different world that we’re living in now. And if you’re writing great music, you’ll be discovered because some of these acts that are big now had to start the same way that I’m telling you to start and that’s from the ground up and you really want it that way. You really wanna be able to start it from the bottom so that way you can learn, you get the dos and don’ts, the ins and outs. And then that way, when you finally get to a table with a record label, you’ll understand what you want and what you need.” Snoop says tenacity and sheer adoration for the craft are essential for an artist to go the distance in the industry. “One of the things I look for is work ethic, the way that they work, songs, concepts, lyrics, selection of music, showmanship, the way that they handle being in front of people, the way that they deal with the ins and outs of knowing that this may not work, you know? So just the reality side of it, to loving what they do, more than loving the results that’s gonna come from it. That’s what I’m mainly looking for, somebody who just loves doing what they do. Cause I love my job. I don’t do this for money or fame. I do it cause I love doing it. That’s why you see me doing so many different things because if I love doing it in this opportunity, I’m gonna keep doing what I love.”

American Song Contest creates an unconventionally equal playing field among artists. A novice could be going toe to toe with an award nominee. Snoop appreciates the egalitarianism and believes it allows the music to shine. “One thing I think that I’ve learned about this show is that nobody’s bigger than nobody. It’s all about the song, the way that song hit. If that song hit, then that’s what state’s gonna be on that top wop and then the name behind it. So I don’t believe it’s about the artist. I believe it’s about the song, the state, and then the artist. And then you got these artists that are big name artists that we know that are performed on the show and they really gotta go with their best material because these people that have not been seen or heard are really shooting they shot. And that’s the thrill of this is that you have the opportunity to be in the same category as a songwriter who’s written Grammy award winning songs and you getting your spirit, right and you mess around and knock them off, that’s real spirit for your next songs and the songs after that, because this is just one song. So if you’re a great songwriter, you’re looking at this experience as the first step to becoming a great songwriter in general.”

For his part, Snoop will continue to contribute his light to audiences and the world with his signature levity. “I think the things that I do are just – like I say, it’s fun based, it’s hip hop. It’s just a big ass kid having the time of his life, doing the things that he always wanted to do. And just putting love in the air. I try to put more love in the air than anything. Cause I come from an environment where we come from violence and negativity. So I try to overwhelm that with peace and love and I feel like that’s the reason why it’s so successful for me. That’s why it’s working because I’m putting a different kind of energy in the world.” Win or lose, with Snoop on deck, it’s going to be a fun ride.