Shiloh Jolie-Pitt, 16, Spotted With A Birthday Balloon On Solo Shopping Outing In LA 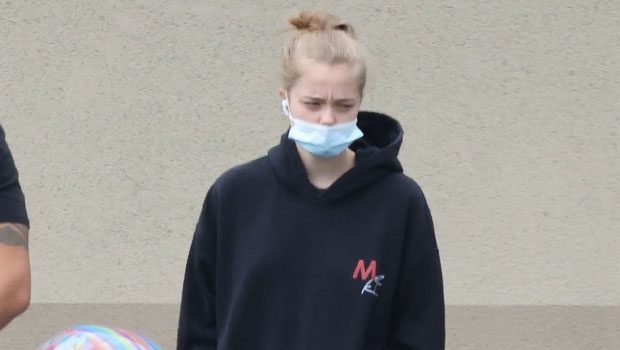 Shiloh Jolie-Pitt, 16, appeared to do some birthday shopping by herself recently. The daughter of Angelina Jolie and Brad Pitt was photographed holding a balloon that read, “Happy Birthday” on it along with a white shopping bag while strolling in Los Feliz, CA. She wore a black hoodie, black shorts, and black sneakers as she added a medical-style face mask to her look during the outing.

She also had her blonde hair pulled back and didn’t seem to pay attention to cameras as she walked by the. It’s unclear exactly who she was shopping for, but her oldest brother Maddox, does turn 21 on Aug. 5, so it’s possible the items had something to do with his special day. Either way, it’s definitely someone important since the teen made a trip by herself to get the goods.

Before Shiloh’s latest shopping outing, she made headlines for happily attending a concert with her mom in Rome, Italy, where she and her family spent a lot of time recently. Both ladies were photographed in the crowd as they watched 2021 Eurovision winner Måneskin. They were both dressed in black outfits and looked like they were having a fun time while chatting, laughing, singing, and dancing together.

Shiloh was also seen grabbing ice cream in the Italian city with some of her siblings just a few weeks before the concert.