Selena Gomez Sparkles In Silver Dress At Premiere For Season 2 Of ‘Only Murders’: Photos 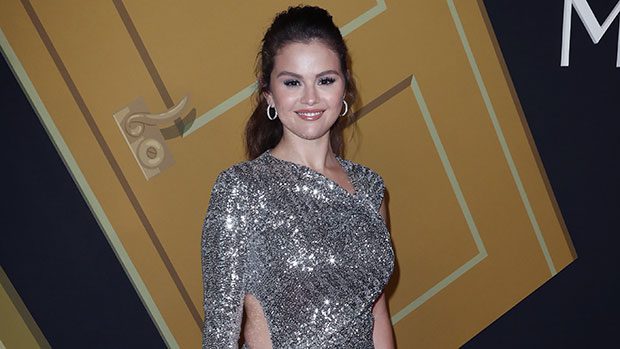 Selena Gomez looked absolutely stunning while attending the Only Murders in the Building season two premiere on June 27. The singer/actress was joined by her co-stars, Martin Short and Steve Martin, on the red carpet for a night to celebrate the Hulu show. With the spotlight on her, Selena was absolutely glowing while wearing a sparkling silver dress at the event.

Selena Gomez at the season 2 premiere of ‘Only Murders.’ (Matt Baron/BEI/Shutterstock)

Selena’s dress had one long sleeve and one short sleeve, as well as a high slit all the way up one leg. There was also a side cutout to show some more skin. Her look was complete with open-toed silver shoes, and she wore a pair of silver hoop earrings to accessorize. For her glam look, Selena had her hair pulled back into a ponytail, with dark liner circling her eyes and a light gloss on her lips.

Selena poses with Martin Short and Steve Martin at the ‘Only Murders’ premiere. (Matt Baron/BEI/Shutterstock)

Season one of Only Murders in the Building, which premiere in Aug. 2021, received major praise from fans and critics alike. The show was nominated for three Golden Globe Awards, including Best Television Series – Musical or Comedy. At the SAG Awards, it received three nominations, as well, including Outstanding Performance by an Ensemble in a Comedy Series. Steve and Martin also both scored individual acting nods at each award show.

The show’s second season premieres on June 28, and there has already been buzz that the show and its stars could score some Emmy nominations.