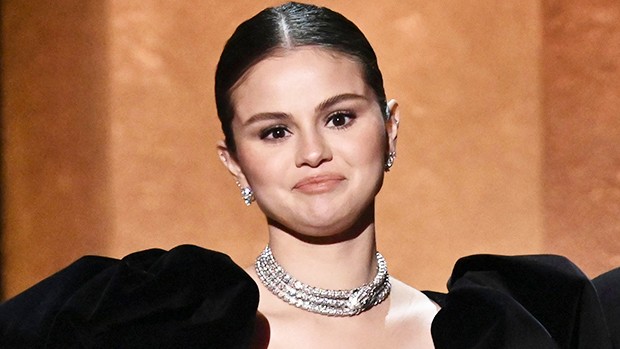 After falling on the red carpet and taking the stage barefoot at the SAG Awards, Selena Gomez broke her silence about the trouble with her high heels at the show.

One day after the 2022 Screen Actors’ Guild Awards, Selena Gomez took to Instagram to reminisce about the night. She shared a number of glamorous selfies from the before the show, and joked about the unfortunate incident with her shoes at the event. “Last night was such a magical one,” Selena gushed. “I couldn’t keep my heels on but I did manage to take a couple selfies.”

Selena walked the red carpet in a velvet Oscar de la Renta dress and pointy-toed, black pumps. However, when she was onstage toward the beginning of the award ceremony to present an award, fans noticed that she was totally barefoot! Selena confidently strutted across the stage without her shoes on, but, of course, everyone was wondering what happened to her high heels.

Not long after, video surfaced of Selena taking a tumble as she walked off the red carpet. A bodyguard helped her up quickly, but one shoe fell off mid-fall, and she immediately took the other heel off as she rushed away from the cameras. Unfortunately, the incident had already been caught on video. Luckily, Selena seems to be taking the situation in stride and is clearly able to joke about it now!

Selena was nominated at the SAG Awards alongside her Only Murders in the Building co-stars for Best Ensemble in a Comedy Series, but they lost to the cast of Ted Lasso. However, Selena looked like she had a great night with co-star, Martin Short, who she presented with onstage at the show.