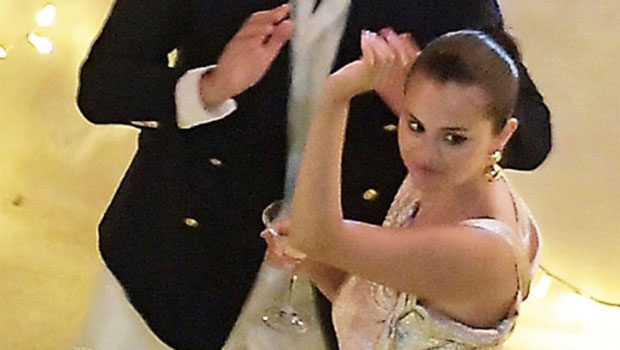 Selena Gomez looked like she was having the time of her life, in a new pic from her 30th birthday celebration. The singer and actress was joined by Italian movie producer Andrea Iervolino at the Torre Normanna restaurant on the Amalfi Coast as she donned a sparkly silver dress that had an off-the-shoulder section on one side and earrings. She also had her long hair pulled back and showed off gorgeous makeup.

The photo showed the beauty dancing with the hunk and others as she held a wine glass. She was also photographed with two birthday cakes, including one that was being presented to her as she looked surprised and happy. Another photo showed her and Andrea hugging as he kissed the side of her head while they looked out at the ocean together.

Before the lavish dinner, Selena and Andrea were spotted hanging out on a yacht together, prompting dating rumors. It’s unclear whether the two are just friends or more, but they definitely appeared to have a great time during the festivities.

Selena’s Italian birthday outing comes after she celebrated her birthday with close friends, including Francia Raisa, Olivia Rodrigo, Camila Cabello, Tyga and more. Photos of her bash made their way around social media and she looked gorgeous in a mini dress lined with feathers. She also celebrated with friend Taylor Swift as the two posed for cute photos at a table together.