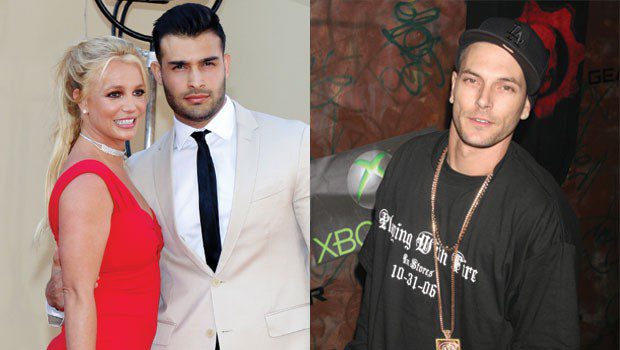 Sam Asghari, 28, is reacting to a new interview with his new wife Britney Spears‘ ex Kevin Federline, 44, which is reportedly set to be released on video this week. The supportive husband took to his Instagram story to defend the 40-year-old singer and debunk Kevin’s claims that her and Kevin’s two sons, Sean Preston, 16, and Jayden James, 15, have been avoiding her due to a number of reasons, including the “nude” pics she’s been posting on social media. In addition to denying Britney’s “nude selfies,” Sam claimed Kevin “hasn’t worked much” and approved her 13-year conservatorship. A source close to Britney tells HollywoodLife, however, that “much of” Kevin’s interview is “untrue” and “she’s seen boys recently.”

“There is not validity to his statement regarding the kids distancing themselves and it is irresponsible to make that statement publicly. The boys are very smart and will be 18 soon to make their own decisions and may eventually realize the ‘tough’ part was having a father who hasn’t worked much in over 15 years as a role model,” Sam wrote at the beginning of his lengthy message.

“Kevin’s gravy trail will end soon wich [sic] probably explains the timing of these hurtful statements,” he continued. “I do not know him personally and have nothing against him aside him chosing [sic] to vilify my wife. His character is revealed by approval of the cruel 13 year CShip and his loyalty to Jaimie [sic] [Spears] indicates his approval at time of its conception as well.”

“Things that are now considered Normal issues and behavior easily dealt with therapy or other ways were magnified to justify a 13 year prison sentence,” he went on.