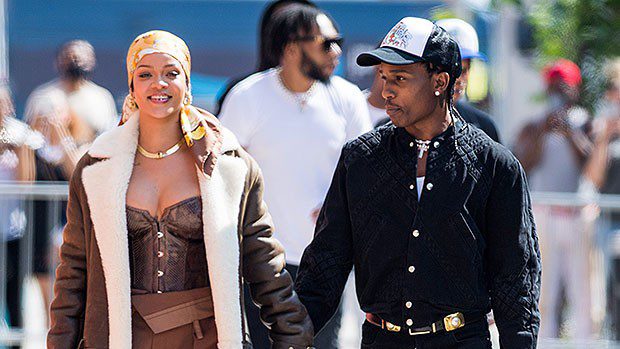 Rihanna has made her first official public appearance since giving birth to her son! The 34-year-old singer and entrepreneur traveled to England to see her beau and father to her newborn, ASAP Rocky, perform at the Wireless Fest in London on July 1. The “Work” singer was videotaped by a fan being escorted by security behind barricades holding back what looked like thousands of screaming concertgoers. She dressed in an all-black ensemble consisting of leggings and an oversized black puffy jacket. Her long hair was straightened and parted down the middle, and she accessorized with gold hoop earrings and a thick chain necklace.

Rihanna spotted out for the first time since giving birth in May at Wireless Fest in London. A$AP Rocky is headlining.
pic.twitter.com/6SjjuOrrMf

While there was no sighting of Rihanna’s son, who was born in May, he was spotted leaving the Van Nuys airport in Los Angeles with his mother on June 30 in the middle of the night. Several members of the Fenty Beauty founder’s entourage loaded multiple vehicles full of her belongings into a private jet plane and then brought her baby on board. Rihanna followed once the plane had been loaded and was ready for takeoff. Rihanna was previously spotted just days after she welcomed her little one into the world, but it was no public debut like the festival.

As noted above, Rihanna and ASAP Rocky welcomed their child on May 13 in Los Angeles,