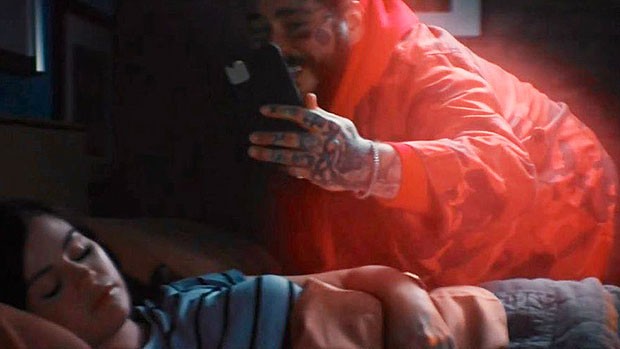 Selena Gomez had no issues cracking a joke about her dating life on her Saturday Night Live opening monologue — and kept the relationship theme going in another sketch that included Post Malone and Chris Redd! In bit, Selena and Chris played a cohabiting couple — however, a voice (Punkie Johnson) suggested that Chris was possibly cheating and not buying paper towels like he said he was!

An angry Selena then began going through his social media posts and computer, even breaking his X-Box at the suggestion of Punkie — but looked rather sheepish when Chris returned minutes later with a bag of Bounty! A second voice popped up just to Chris, this time in the form of Post Malone, who suggested Sel only thought he was cheating because she was cheating. “She’s getting dude nudes,” he sang in the hilarious sketch. “From who?” Chris asked, as Post Malone suggested they were maybe from LeBron James.

Selena Gomez and Post Malone appeared in an ‘SNL’ sketch on May 14. (NBC)

The Disney album’s appearance comes hot off her critically acclaimed series Only Murders in the Building, in which she plays character  Mabel Mora. A hit dark comedy on Hulu, Only Murders in the Building takes place on the Upper West Side of New York City. The plot of the first season revolves around three tenants of a lavish apartment building who try to solve the tragic and mysterious murder of a fellow resident. In the show, the three main characters are played by Selena Gomez,