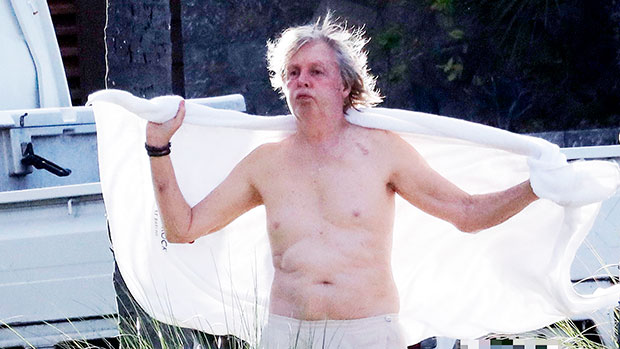 Romance on the run! Paul and his love shared a sweet moment before he went in the water during their beachy Caribbean vacation.

Love me do! Paul McCartney, 79, couldn’t hide his feelings for wife Nancy Shevell, 62, while vacationing in St. Barts together on Monday, Mar. 28, 2022. The Beatles bassist enjoyed a bit of PDA with his wife of 11 years while at the beach. Making the most of their outing, Paul later stripped off his shirt to take a dip in the ocean.

Paul McCartney took a dip in the ocean during his recent vacation to St. Barts. The 79-year-old rocker was seen shirtless at the beach. (Spread Pictures/MEGA)

Paul was clearly still smitten with Nancy during their day trip, where she was seen gazing at the brunette businesswoman sweetly, before pulling her in for a tender kiss. The rocker looked cool in a black hoodie and shorts as he locked his fingers with Nancy’s and planted a sweet smooch on her lips.

Nancy, who was effortlessly elegant in a flowy white dress while out, smiled softly before parting ways with Paul and letting her love enjoy the water. Paul peeled off his shirt for a bit of splashing and was later seen toweling off his shirtless torso.

Paul kissed his wife of 11 years during the beach day. (Spread Pictures/MEGA)

It seemed like a relaxing getaway for the duo, who have been together since 2007 and married in 2011. Days earlier, the couple had been seen strolling around the island together hand-in-hand.

Paul made time during his vacation to pay tribute to Foo Fighters‘ drummer Taylor Hawkins,