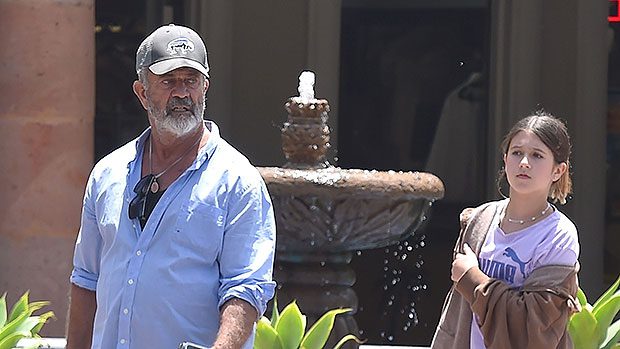 Mel Gibson spent some quality time with his 12-year-old daughter Lucia Gibson on Thursday, and the duo looked relaxed as they bonded during their day out! Mel, 66, took the opportunity for a rare outing to a Ralph’s grocery store with Lucia in Malibu, wearing a casual blue shirt, gray ballcap, and black slides. He carried sunglasses perched around his neck and appeared to be clutching a wallet in his left hand as he made his way from the store to his car.

Mel Gibson and daughter Lucia are seen in Malibu on June 9, 2022. (BACKGRID)

Daughter Lucia covered up with an oversized brown hoodie over the top of a pink tee and rocked comfy sweatpants and black sneakers. She also wore a cute necklace and pulled her light brown hair into a carefree low ponytail while carrying a small bag of groceries.

Lucia’s mom is Russian pianist Oksana Grigorieva, 52. Lucia is the second youngest of Mel’s nine children and his youngest daughter. Born October 30, 2009, she was at the center of an unfortunately contentious split that included allegations of domestic violence. At the time, pal Jodie Foster explained why she was standing by her longtime friend and colleague.

“I’ve known him for 20-something years, and he’s someone that I really love and I really care about,” she told The Daily Beast in 2016. “I obviously can’t condone his behavior—his private behavior. What do I know about his private behavior? But I do know the man I know,