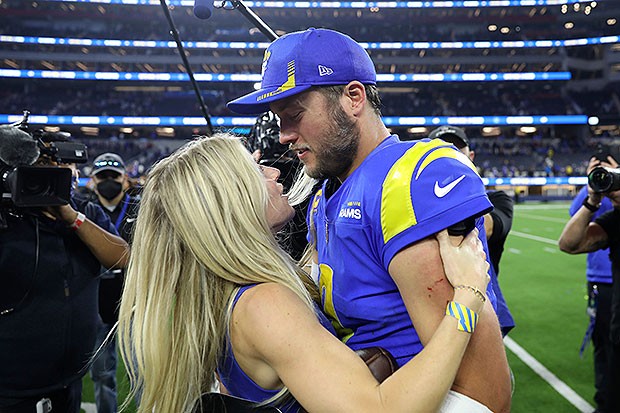 It was all love from Kelly Hall after Matthew Stafford’s big game. The Los Angeles Rams quarterback’s wife celebrated her husband’s big win after Super Bowl LVI on Sunday.

Winning is sweeter together! Kelly Hall, Los Angeles Rams quarterback Matthew Stafford‘s wife of seven years, had the sweetest reaction to her husband’s big win on Sunday night. After the Rams beat the Cincinnati Bengals 23-20 for the title of Super Bowl LVI champion, Kelly couldn’t contain her excitement and joy. Always supportive of her husband of seven years, Kelly looked over the moon right after the big game as she celebrated joyfully with friends in the stands.

At this year’s Super Bowl, held at SoFi Stadium in Los Angeles, the competition was heavy, with the game staying close throughout until the Rams finally triumphed 23-20. Matthew had multiple standout touchdowns, and Kelly looked overjoyed as she snuggled her adorable daughter to celebrate. The whole family, even their baby daughter, came out to support Dad!

But at the end of the day, what matters most is who you go home to off the field, and Kelly proved Matthew is one lucky guy as she led her three daughters in a line with a fourth on her hip to congratulate their champion dad on the field.