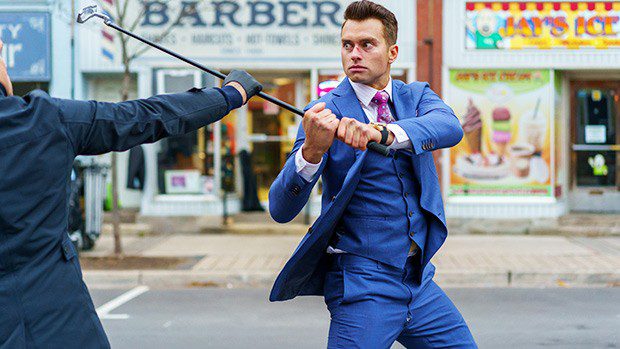 For Pierson Fodé, the role of The Man From Miami was a no-holds-barred trip into the world of a villain. Initially, Pierson’s role in The Man From Toronto was much smaller in the original script, but the character was expanded upon in the revised vision. HollywoodLife spoke EXCLUSIVELY with Pierson about why he was all-in with The Man From Miami.

“He’s kind of like the Terminator. He just kept going,” Pierson told HollywoodLife. “When I initially read the script, his part was much smaller. He had a very cool entrance, and he had his three-piece suit on and was ready to rock and roll. But when I saw the revised script after I booked the project, he just got even more badass. I just couldn’t help but really dive into it. I think one of the things that was most exciting was, honestly, the action and diving into a character that is kind of like American Psycho in a lot of ways.”

After booking The Man From Toronto, Pierson was put in a training regimen and began working with Phil Silvera, who did all the stunt choreography and was a second unit director. He ended up training for 4 months.

“So for a month, we trained for anywhere from 4 to 8 hours a day doing stunts and choreography and fight choreography. But then he also brought in an Army Ranger by the name of Jack Nevils, who’s a real American hero. I played the bad version of him in the movie,” Pierson revealed. “He’s the real guy that would go out to literal terrorists and eliminate targets and protect America and the world and some of the things he can’t talk about.