Madonna Sticks Out Her Tongue During NYC Bike Ride: Photos 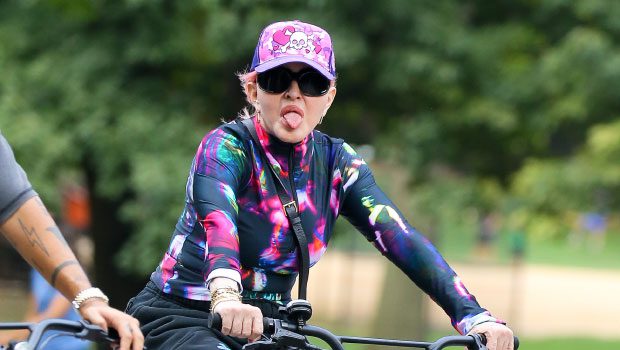 It’s Madonna’s world and we’re just living in it! The Material Girl was spotted back in New York City on Friday, August 26 after a whirlwind trip to Sicily to celebrate her 64th birthday. Rocking a colorful spandex top, flower-graphic jogger pants and a skull baseball cap, Madonna enjoyed a bike ride in the Big Apple with some friends. To prove she’s the one and only queen, the “Like A Virgin” hitmaker stuck out her tongue in a playful mood.

Madonna stuck out her tongue during a bike ride in New York in August 2022. (SplashNews)

Meanwhile, Madonna’s BFF Britney Spears’ new duet with Elton John has the Dick Tracy star itching to drop a ditty with the pop princess. A source EXCLUSIVELY told HollywoodLife that musicians are getting in line to lay down a track with Britney. The insider said that Britney and Elton’s reimagining of “Tiny Dancer” has “opened the doors for other artists to try and do collaborative work with her, one of them being Madonna.”

“The two of them are close friends and Madonna has been trying to get Britney to do a track with her for quite some time now, but now that she saw the doors were open, she has really been pushing for it for reals,” continued the source. “Britney has not accepted the offer but of course she has considered it. Madonna is an icon and Britney is starting to realize, again, that so is she.” The insider went on to say that the “Toxic” hitmaker “appreciates all the offers” and is “honored” that so many incredible artists are eager to work with her.