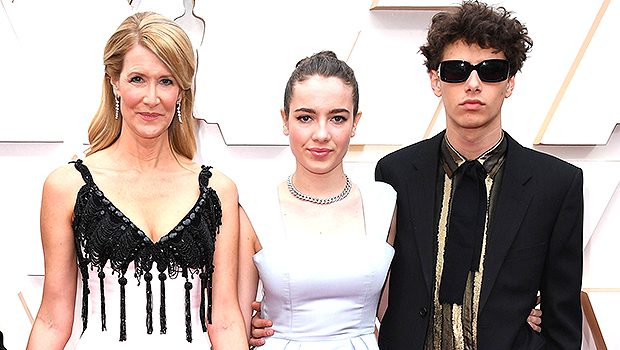 Happy Birthday, Ellery Harper Walker! Laura Dern gushed about her older child, as he celebrated his 21st on Monday, August 21. The actress, 55, shared both a throwback photo of her son as well as a more current picture alongside her daughter Jaya Harper, 17, and her mom Diane Ladd, 86, on her Instagram. It looked like the whole family were having a blast celebrating the Oscar-winner’s grown-up son.

Ellery stood between his mom and grandma for the photo, as his younger sister cozied up to Diane. He smiled as he stood next to his mom. While his curly hair is similar to his mom’s, his facial hair does mark a resemblance to his dad Ben Harper. Ben and Laura got married in 2005, but they finalized their divorce in 2013. Jaya and Ellery are their only kids together, but Ben does have a son and daughter from his first marriage.

In the caption, Laura gushed about her son, calling him the “Greatest gift I could have ever dreamt up.” Besides wishing him a happy 21st, she also shared some of the wonderful qualities that make him an amazing son. “You teach me every day…about art..empathy..and grace. You are a profound human and artist. And you are such a kind and amazing man. I’m so blessed and lucky to love you and learn from you. And you make me laugh every day,” the Marriage Story actress wrote.

Laura smiles along with her kids at the ‘Little Women’ premiere. (Shutterstock)

Laura rarely posts photos of either of her kids,