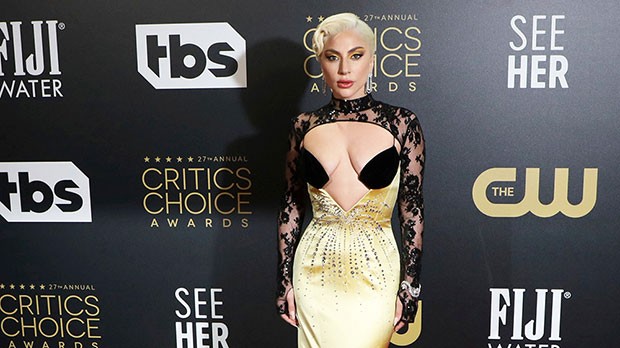 Lady Gaga stunned in a dramatic Gucci gown at the Critics Choice Awards just hours after appearing after the BAFTAs.

Plane, club, bus, another club…Lady Gaga wasn’t kidding when she talked about the jet-setting lifestyle in the now-viral TikTok sound, and on Sunday she proved she’ll always look good doing it. Just hours after appearing on the BAFTA’s red carpet in a plunging emerald gown, Gaga hit the Critics Choice Awards red carpet in a dramatic Gucci look with a revealing lacy neckline. See the photos here!

Gaga proved she’s the master of the quick-change when she arrived at the Critics Choice Awards on such short notice, and in absolute eye-catching fashion. Her statement Gucci gown featured sheer lace sleeves with fingerless gloves, a revealing strapless neckline, and a bedazzled peach bodice fitted right to Gaga’s frame.

Lady Gaga was nominated for a Critics Choice Award for her role as Patrizia Reggiani in ‘House of Gucci.’ (Vianney Le Caer/Invision/AP/Shutterstock)

The singer, 35, completed the look with a pulled-back hairstyle and glowing gold eye makeup The standout ensemble made Gaga the star of the event she attended alongside entrepreneur boyfriend Michael Polansky, 44, who Gaga has been dating since late 2021. She gushed over him in a Nov. 2021 interview with The Hollywood Reporter, sharing: “My dogs and the man that I love are my whole life.”

Gaga attended the awards to celebrate a nomination for her performance as Patrizia Reggiani in Ridley Scott‘s House of Gucci, which she starred in alongside Adam Driver and Jared Leto. The performance has earned her a host of nominations this season,