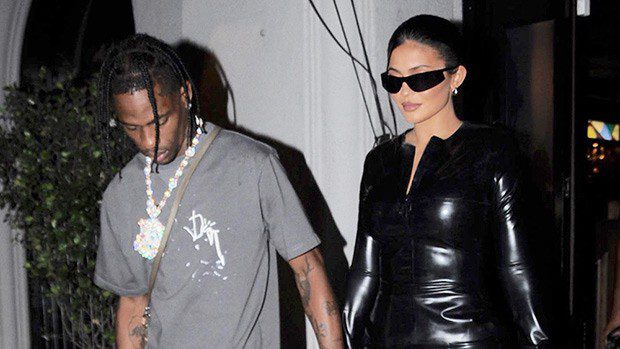 As Keanu Reeves famously said: “Woah.” Kylie Jenner was one part Neo, one part Trinity, and all glam when she hit up Craig’s in West Hollywood on Sunday night. Kylie, 24, wore a black PVC mini-dress for her July 10 dinner with Travis Scott. The outfit looked like she had walked off the set of 1999’s The Matrix, though it would be hard for The Kardashians star to pull off any martial arts moves while wearing those matching black pumps and carrying that jeweled clutch. Kylie opted for some slick sunglasses when she and Travis, 31, exited the celeb hotspot.

For his part, Travis dressed casually for dinner. The “Sicko Mode” rapper wore a slate-gray t-shirt, some distressed faded jeans, and some sneakers. He complimented the look with a statement piece of jewelry and what appeared to be a high-end canteen. Though Trav’s casual look was a striking contrast to Kylie’s PVC dress, the two seemed like a perfect match, especially when La Flame held Kylie’s hand as they left the restaurant.

Travis also held Kylie’s hand when they went out the night before this Craig’s dinner date. On July 10, the two ate at Catch in West Hollywood. Like this Craig’s dinner, Kylie dressed up for the affair by wearing a long-sleeved mini-dress, while Trav dressed in a printed shirt and jeans. Trav also took a page out of Tyler, The Creator’s book, by donning a patterned winter knit cap as he and Kylie made their way past the paparazzi’s cameras.