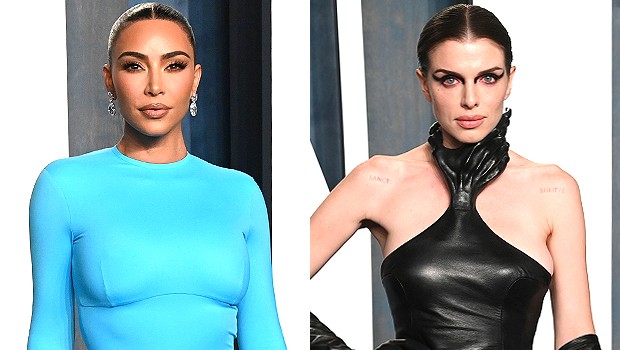 Awkward! Kim Kardashian and Julia Fox were both at the Vanity Fair Oscar Party on March 27, and fans are imagining a possible conversation between the two stars.

Kim Kardashian took a chance running into Kanye West‘s recent ex, Julia Fox, at the Vanity Fair Oscars after-party on March 27. The SKIMS founder, 41, and the Uncut Gems actress, 32, were both photographed at the Wallis Annenberg Center for the Performing Arts in Beverly Hills. Both women looked absolutely gorgeous at the event. While Julia’s been known to emulate Kim’s fashion, their outfits were very different this time around.

Kim stunned in a skintight, bright neon blue Balenciaga Fall 2022 Dress with long sleeves and a long flowy train. She accessorized her look with a pair of silver sunglasses and black boots. Kim posed for photos alone, but she was seen inside the event with her sister Kendall Jenner. Kourtney Kardashian and Travis Barker were also at the star-studded event.

Julia was also photographed on the Vanity Fair afterparty red carpet. She rocked a black leather dress with matching gloves and a pair of black boots. Julia arrived holding a black bag that appeared to be made out of human hair. It’s unclear if Julia and Kim saw each other at the party. If they did, it’s doubtful they interacted. That would’ve been very awkward!

The main thing Julia and Kim have in common is Kanye,