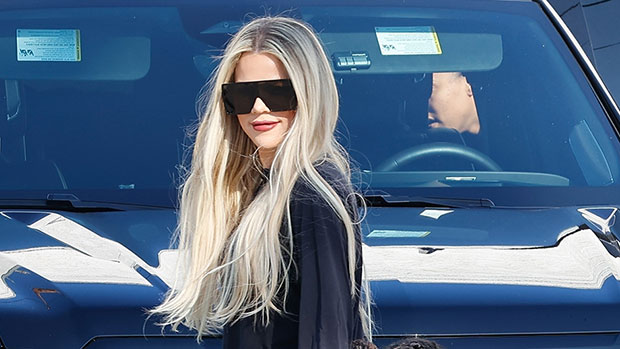 Khloe Kardashian was spotted out and about with daughter True after shading Rob Kardashian’s ex Blac Chyna over recent comments.

She’ll stand up on her word! Khloe Kardashian had no problem smiling and waving to the paparazzi while out with daughter True, 3 after she seemingly shaded her brother Rob Kardashian‘s ex Blac Chyna, who recently claimed she gets “no child support” from Rob. The mother-daughter pair were too cute as always, and Khloe even held True in her arm at one point as they enjoyed the sunny day.

Khloe held True close as the duo strolled together in the sunshine, rocking similarly stylish but oppositely colored looks. While Khloe chose head-to-to black, including her visor-style sunglasses, True looked too cute in a pink and purple ensemble, complete with a patterned athletic onesie, purple sandals, and a comfy purple windbreaker. Making sure to hold tight to True, and even lifting her up into her arms at one point to True’s clear delight, Khloe managed to juggle her keys and water bottle in the other hand. Talk about a mom on the go!

True couldn’t have looked happier as Khloe lifted her into her arms as they strolled together. (BACKGRID)

Khloe’s adorable outing with True comes as she’s in full-family mode, and focused on protecting younger brother Rob. After Blac Chyna tweeted about apparently needing to sell three of her cars due to no “support” and being a “single mother.” After the tweet was posted by IG account The Shade Room,