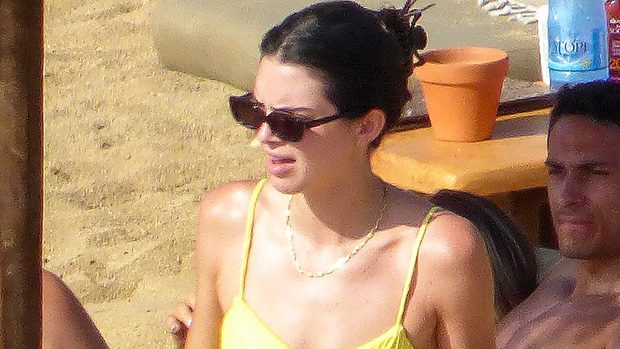 Fans of Kendall Jenner got a treat on Thursday (July 14) when the 26-year-old model posted a series of photos and videos from a recent getaway. Starting with a picture of her posing against a tropical sunset, the Instagram gallery also included a shot of her Jeep Rubicon with the lush mountains in the background, a cooler full of Modelo and her 818 Tequila, a gorgeous waterfall, and – most importantly – her outfits for this retreat. Kendall flaunted her fit figure in a set of barely-there bikinis in a trio of slides.

First, she lounged alongside the pregnant Lauren Perez on a boat, with Kendall wearing a multi-colored two-piece. In a second slide, the Kardashians star modeled a red-and-white floral bikini while wearing a white cap. She seemed to enjoy how cute she looked, judging by the bounce in her hips. In a second video, Kendall – wearing another bikini – steps out of the waves after taking a dip in the tropical waters.

Her vacation photos earned high praise from her fans. “Bawdy,” wrote Malika Haqq. “cutie pie loverz,” added Jesse Jo Stark. “This is quite possibly the most beautiful post I have ever seen,” added another fan. The rest of the comments were similar, with some leaving heart emojis, and others writing things like, “The most beautiful ever.”

Kendall’s holiday comes roughly a month after she and Devin Booker called it quits. Initial reports claimed that Kendall felt like she and the Phoenix Suns player were “on different paths,” and a source told HollywoodLife EXCLUSIVELY that she thought “he was taking the relationship as seriously as she was.