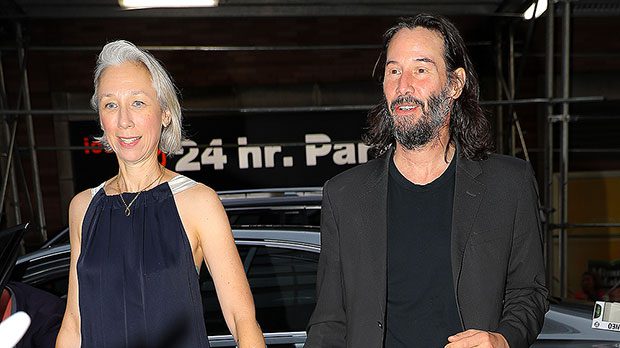 Keanu Reeves and Alexandra Grant are on a sweet PDA streak! Just one day after being spotted holding hands while walking in New York on June 7, the lovebirds were seen yet again holding hands, this time while heading out for a romantic Broadway date night! The stylish duo arrived, hand in hand, at American Buffalo on Broadway on July 8.

In photos, artist Alexandra, 49, appeared effortlessly chic in a flowing navy-blue maxi dress. She pushed her silver hair behind her ears for a sleek look and accessorized with simple jewelry. She wore strappy sandals and carried a brown bucket bag and denim jacket. The John Wick star, 57 coordinated well with her, with a dark monotone look and brown boots.

Keanu and Alexandra became red carpet official back in November 2019, when they hit the LACMA Gala together. But it turned out that Keanu, who hadn’t had an on the record girlfriend for decades, had dated the artist and book illustrator for years beforehand. Predictably enough, the public went wild when the “internet’s boyfriend” made things official with Alexandra.

Back in March 2020, the famed Los Angeles artist said it was a bit overwhelming at the time. “I think every single person I knew called me in the first week of November [2019], and that’s fascinating,” she told British Vogue.