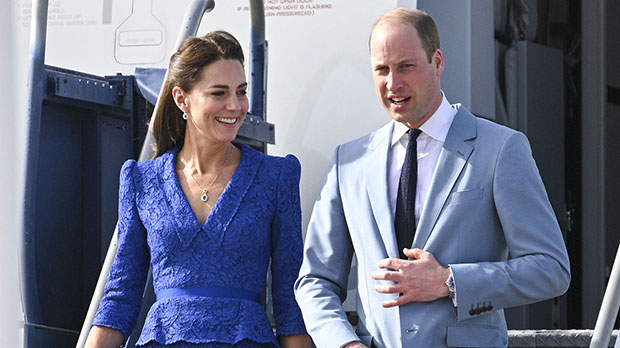 Kate Middleton and Prince William dazzled in matching blue outfits, making a tribute to Belize’s royal colors as they continued on their Caribbean tour.

Sometimes the attire says it all, and when it comes to Kate Middleton and Prince William‘s ambassador duties, sending the right message amidst troubling times couldn’t be more important. During a recent royal visit to the Caribbean, Kate and Will did just that when they chose matching in deep-blue outfits as a clear homage to Belize’s royal color. Looking happy and demure as always while stepping off their plane, Kate and Will’s subtle sign of respect came after many Belizeans protested the tour itself.

Prince William and Kate Middleton paid a subtle tribute to Belize’s royal colors as they arrived at a stop on their Caribbean tour. (Tim Rooke/Shutterstock)

Kate and Will’s visit to the Caribbean, a British royal tradition once carried out by Will’s late mother Princess Diana, has caused some turbulent reactions in the country. As Barbados seeks independence from the UK as its own republic, according to The Guardian, some see the Duke and Duchesses tour as a thinly-veiled attempt to garner support for the monarchy and assure stability. Furthermore, some residents of the Toledo district in Belize have grievances with a charity Prince William supports, Flora and Fauna International. Kate and Will had planned to visit a cacao farm in the region but canceled it in light of the upset.

Kate and Will looked happy and united as they kicked off their Caribbean tour on Saturday, Mar. 19. (Tim Rooke/Shutterstock)

Although their royal visit came with some conflict, Kate and Will were all smiles as they arrived on Saturday,