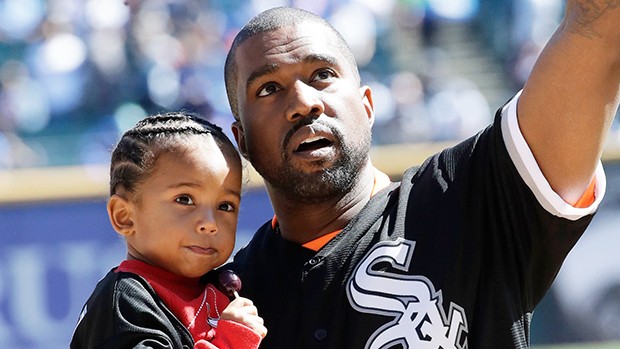 Despite recent claims that Kim Kardashian is keeping him from his kids, Kanye West attended a basketball game with his six-year-old son, Saint, on March 16.

Kanye West got in some bonding time with his son, Saint West, at the Golden State Warriors game in San Francisco on March 16, in photos that you can see here. Kanye and Saint sat courtside at the game, matching in grey jeans, leather jackets and black boots. The proud dad could be see chatting with his son during the game, and even introduced the six-year-old to some players on the court.

This special outing comes amidst Kanye’s claims that his ex, Kim Kardashian, has kept him from seeing their four children. Earlier this week, he posted on Instagram about having to be “allowed” to see North West, and Kim publicly clapped back. “Please stop with this narrative,” Kim wrote back. “You were just here this morning picking up the kids for school.”

Later that day, Kanye continued his public tirade against Kim. “My kids were not allowed to go to Sunday Service yesterday and there’s multiple times where the schedules were changed last minute which alienated me as a parent,” Kanye alleged. “A lot of baby mamas play like this across the word but nobody finna play with me or my children.” He also claimed that Kim “ignored” a text from him asking to bring the kids to church.

Kim Kardashian and Kanye West before their split. (Laurent Benhamou/Sipa/Shutterstock)

In addition to going off on Kim recently, Kanye has also targeted the reality star’s boyfriend,