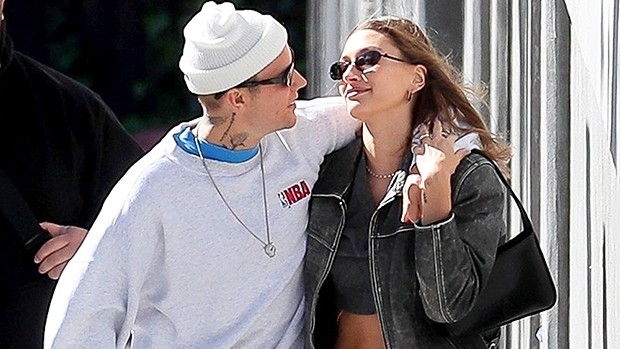 The ‘Peaches’ singer gazed lovingly in his wife’s eyes while out for a walk after she was treated for a blood clot.

Justin Bieber, 28, was an incredibly sweet husband to his wife Hailey Baldwin, 25, while they went out for a bite in Los Angeles on Sunday March 20. The Justice singer wrapped his arm around the model 10 days after she was hospitalized for a ‘small blood clot’ back on March 10. The pair were heading out for brunch at LA’s SoHo House, and the couple seemed so in love.

Justin and Hailey looked super sweet while out for a stroll. (BACKGRID)

The pair were dressed casually for the weekend outing. Justin sported light blue sweatpants and a gray NBA sweatshirt over a blue t-shirt. He completed his outfit with a white beanie and sneakers, and he accessorized with a chain necklace. Hailey stunned in a black crop top and a pair of jeans as well as a leather jacket, while she lovingly looked at her husband. The pair matched with black sunglasses while on the walk.

The brunch date came 10 days after Hailey’s scary experience being hospitalized. The model opened up about what symptoms she went through before rushing to the hospital two days after. She told fans that she “started having stroke like symptoms” over breakfast with Justin before rushing to the hospital. “I had suffered a very small blood clot to my brain, which caused a small lack of oxygen, but my body had passed it on its own and I recovered completely within a few hours,” she wrote. ““Although this was definitely one of the scariest moments I’ve ever been through,