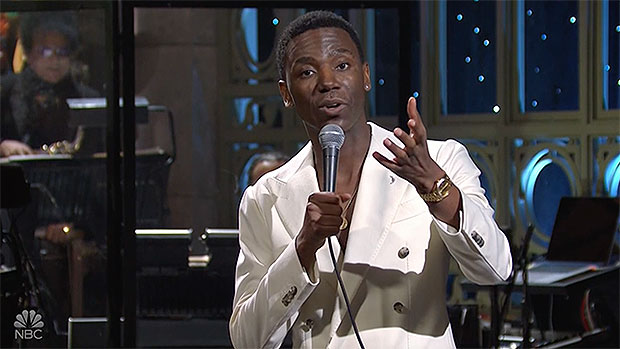 Comedian Jerrod Carmichael took the stage to host SNL on April 1st, bringing the laughs to Studio 6H through a variety of characters and sketches.

After a lengthy spring hiatus, ‘Saturday Night Live‘ came back with a bang on Apr. 2nd, with comedian Jerrod Carmichael, 34, taking the hosting reins. Fresh off his brand new HBO special “Rothaniel,” where he publicly came out as a gay man for the first time, Jerrod didn’t hold back when it came to laughs, hilariously embodying characters from a frustrated dollmaker to an unlucky Oscar’s “seat filler,” not to mention nailing his opening monologue.

Jerrod Carmichael took the stage at SNL for the first time and joked about “healing the nation” after coming out as gay. (NBC)

From the moment he set foot onstage after the raucous cold open (complete with a Cecily Strong-as-Judge-Jeanine-Pirro appearance), Jerrod demonstrated his confidence (and prowess) working a crowd with his comedy. Rocking a low-cut white suit jacket that showed off his golden chain and a matching pair of tailored pants, he came onstage and immediately addressed the moment in his recent special where he publicly came out as gay for the first time…by not addressing it.

First off, he immediately makes clear to the audience “I’m not gonna talk about it.” Jerrod continued in an on-point skewer of how popular his coming out has been, sharing it feels like everyone has been “living in the wake” of it since it happened, and it feels like it’s been “years” since his announcement. Then, he jokes as to why it feels like everyone has been talking about it to endless cheers upon saying: “I feel like I’m the least famous host in SNL history.” Finally,