J.Lo Shows Off Her Wedding Band As She Gets Back To Work At Dance Studio After Wedding: Photo 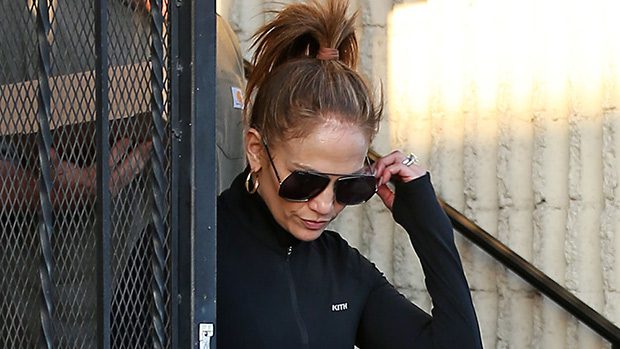 Jennifer Lopez had that newlywed glow as she hit up a dance studio in Los Angeles on July 18. Although she appeared tired and wanting to avoid the paparazzi cameras, the gorgeous newlywed had her wedding band on display alongside her engagement ring on the outing. She wore snakeskin leggings and a long-sleeved top, along with sneakers and sunglasses for the casual appearance. Despite marrying Ben Affleck just two days prior, Jen was back to business as usual on the Monday after her nuptials.

Jennifer Lopez out after her wedding to Ben Affleck. (TheCelebrityfinder/MEGA)

Jen and Ben shocked fans with their July 17 announcement that they had eloped in Las Vegas the previous night. The wedding came just over three months after Ben quietly proposed to Jennifer while she was taking a bath at home. Of course, these two have much more of a history than that, though. They were previously engaged in 2002 and set to tie the knot in Sept. 2003, but called off the wedding just days before the ceremony. They wound up splitting in 2004, and did not reconcile until 17 years later in 2021.

This time, though, they DID make it down the aisle, and there’s reportedly more where that came from. Later this month, Jen and Ben are set to have a bigger ceremony with friends and family in attendance. The second wedding is reportedly taking place at Ben’s Georgia estate, and is likely to be a much more lavish affair.