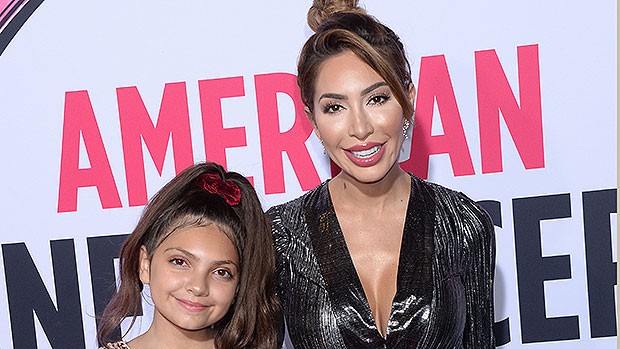 Farrah Abraham‘s daughter, Sophia Abraham, is perhaps the bravest teen around, as she just celebrated her 13th birthday by getting a septum piercing! The teen, whose birth was documented on the MTV show 16 and Pregnant, has also appeared with her mom, 30, on Teen Mom. Now, she seems to be growing up so fast!

“I got my septum piercing for for my birthday!!” Sophia wrote in the caption of an edited video she made to document the event. “I am so happy with how it turned out! I am the first person in my family to get a septum piercing at 13!! Birthday wish came true!!” In the clip, Sophia showed off a punk rock look to go with her punk rock piercing, sporting purple hair, a graphic tee, and a silver chain necklace with a small padlock.

“SOPHIA THE FIRST,” Farrah started her post in the comments section, adding, “The first 13 year old in the family to get a septum piercing! Birthday wish come true! Happy memories ! Love you! Epic 13!”

Farrah is happy to celebrate her daughter, and recently celebrated her daughter’s father, the late Derek Underwood, who died in a car crash 13 years ago, just two months before Farrah gave birth to their daughter. To honor her late partner, the Teen Mom star shared a montage of photos of Derek’s grave on Dec. 28, alongside a touching message.