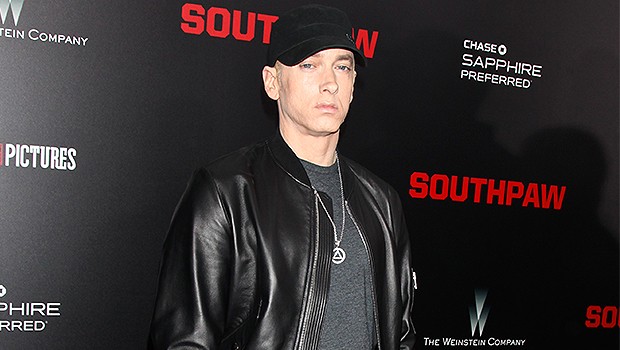 Eminem expressed his nerves over his upcoming half-time show slot at Super Bowl LVI in a new interview with Shade 45, where he called the performance “nerve-wracking.”

Even Slim Shady gets stage fright sometimes! In a new video, Eminem opened up about his headspace before he co-headlines the Super Bowl half-time show tomorrow night. In an iconic 00’s-hip-hop link-up, Eminem will be sharing the stage on Sunday night with Mary J. Blige, Kendrick Lamar, Snoop Dogg, and Dr. Dre. In the clip, Eminem revealed he’s nervous for the big moment, telling interviewer Sway Calloway: “To me, there’s nothing more final than live TV.”

Eminem opened up about his nerves pre-Super Bowl half-time show in a new clip. (Gregory Pace/BEI/Shutterstock)

In the new video, part of an interview Eminem did for SiriusXM’s Shade 45 podcast, Em had no false ideas about the size of his responsibility at the Super Bowl. When Sway mentioned the size of the half-time show stage Eminem began discussing the “nerve-wracking” experience. He emphasized how the permanence of a live TV performance raises the stakes, explaining: “If you f**k up, your f**k up is there forever.”

Ahead of the big day, half-time show sponsor Pepsi released a dramatic trailer where all five Super Bowl performers descend together onto SoFi Stadium after facing individual obstacles. In the clip, Eminem is at his motor-mouthed best while rap battling a unique foe: himself.

Although the trailer could have been out of a superhero movie, preparation for the big show has had light-hearted moments as well.