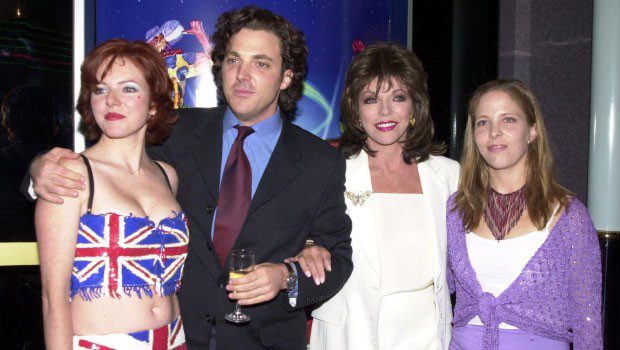 Dame Joan Collins gave her fans a scare recently when she was airlifted to a hospital in Monaco. The iconic British actress, who became a household name starring in Dynasty, is on the mend after being treated for a pinched nerve in her leg. “She’s back home in St. Tropez and is walking around,” Joan’s friend told Page Six. “She’s 89 and is still walking around in six-inch heels.” The star’s rep added, “The pain has been excruciating, but fortunately she’s dealt with it, and she’s OK now. She’s in the South of France enjoying the rest of her holiday.”

With a renewed spotlight on Joan, followers are clamoring to know more about the star’s personal life. The gorgeous actress, born in 1933 in Paddington, England, was married a whopping five times; she called Maxwell Reed, Anthony Newley, Ron Kass, Peter Holm and Percy Gibson her husband so far, with Percy being her current beau. Out of the five marriages, Joan was blessed with three children. Keep reading to find out all about them, below.

From 1963 to 1971, Joan was married to British singer-songwriter Anthony Newley. During his career, Anthony scored quite a few Top 40 hits as a songwriter, including “Feeling Good,” which was covered by Nina Simone. He also received an Academy Award nomination for the film score of 1971’s Willy Wonka & the Chocolate Factory.

In their first year of marriage,