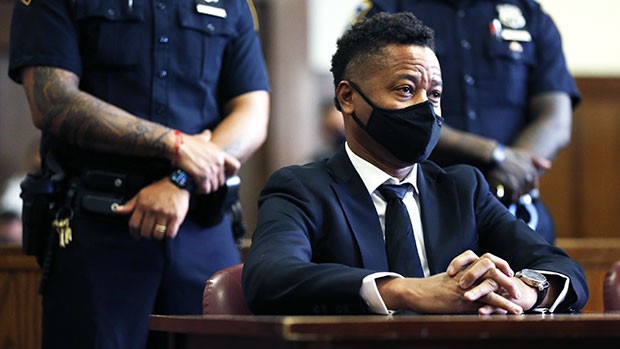 Cuba Gooding Jr. has pleaded guilty to one count of forcible touching three years after he was accused of violating three different women at NYC nightclubs in 2018 and 2019.

Jerry Maguire star Cuba Gooding Jr., 54, pleaded guilty to one count of forcible touching in a criminal case on April 13, nearly three years after he was accused of violating three different women at various NYC nightspots in 2018 and 2019, according to Variety. The single guilty plea comes after Cuba’s 2019 arrest in the case that went through several delays, as his lawyers fought to get the charges reduced or dropped altogether. The case had previously been scheduled to go to trial at least twice, but a surge in COVID-19 cases in April 2020 caused most court cases to get delayed.

Actor Cuba Gooding Jr. and his attorney Mark Heller listen to court proceedings as he is accused of sex crimes in Lower Manhattan on October 18, 2021 in New York City, USA. (John Lamparski/NurPhoto/Shutterstock)

Cuba was arrested in June 2019, after a 29-year-old woman claimed he grabbed her breast without her consent at Magic Hour Rooftop Bar & Lounge near Times Square. Then, just a few months later, he was charged in two more cases as more women came forward, accusing him of abuse. One charge alleged he pinched a woman’s butt after making a sexually suggestive remark to her at TAO Downtown, and another claimed he forcibly touched a woman inappropriately at the LAVO New York nightclub — both incidents allegedly occurred in 2018.

Cuba pleaded guilty to the LAVO nightclub allegation. Page Six claims the actor took this plea deal so he could stay out of jail and keep working.