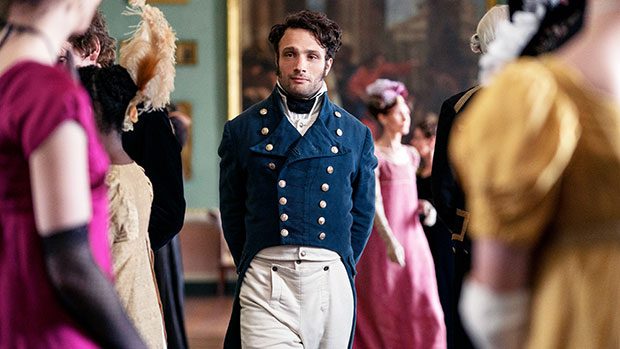 Jane Austen’s beloved novel Persuasion comes to life on Netflix in the streaming service’s latest film adaptation. The movie stars Dakota Johnson, Henry Golding, and Cosmo Jarvis. Cosmo is an actor on the rise, and Persuasion is just the latest showcase of his raw talent.

So, who is Cosmo Jarvis? The 32-year-old actor has had notable roles in film prior to Persuasion. From his family background to his music career, HollywoodLife has rounded up 5 key things to know about Cosmo.

Captain Frederick Wentworth is one of Anne Elliot’s main love interests. He proposed to Anne when he had no money or prospects. He returns after 8 years away a self-made man and finds himself in a love triangle with Anne and Mr. William Elliot. The movie is being released on Netflix on July 15.

Prior to Persuasion, Cosmo had his breakout role in the 2016 film Lady Macbeth. He also earned critical acclaim for his performance in Calm With Horses.

2. Cosmo was born in New Jersey.

Cosmo was born in New Jersey but moved to England when he was just a baby. His mother is Armenian-American and his father is English. His parents split up when he was a kid. “There was always problems at home – always,” he told The Guardian. “It was more than a divorce. It went on for ages. Still going on, 10 years later. I guess they actually split when I was nine years old.”