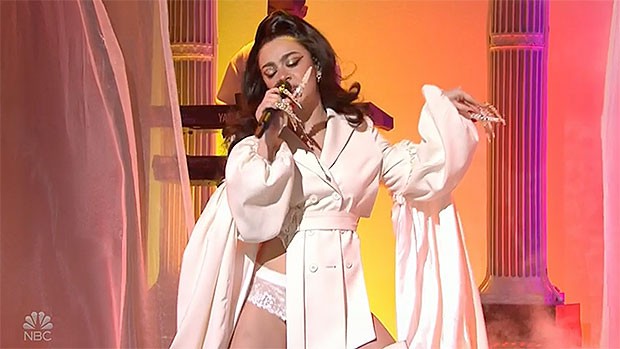 Charli XCX returned to the SNL stage after a previously planned Christmas show was canceled due to the crew catching COVID-19.

She’s back, and she just might be better than ever! Charli XCX finally returned to the ‘Saturday Night Live‘ stage on Mar. 5, for an especially long-awaited performance. The pop star had previously been set to perform on the show Dec. 18 alongside artists Caroline Polachek and Christine & The Queens, but was unable to after the surge of the COVID-19 Omicron variant in New York left SNL with a limited crew. With her triumphant return, the artist showed a hiatus that didn’t hold her back at all.

Charli XCX took the SNL stage on Mar. 5 to perform her new track “Beg for You.” (NBC)

Charli started off performing her new single with Rina Sawayama, “Beg for You.” Rocking a short white mini with extreme puffed sleeves and miles-long fingernails, Charli rocked the stage with her unique style of dance and performance. With the Studio 8H stage transformed by smoke machines, white pillars, and billowing, filmy curtains, Charli completely made the performance her own.

Later in the night, Charli returned to the stage to debut her new song “Baby” alongside two fabulous, silk-shirt clad dances. Prancing around the stage in a carefully choreographed dance and a sexy fringed leather outfit, Charli’s impressive moves proved she can hold her own with any of today’s pop girls.

Back in 2021, Charli was announced as the musical guest for a Dec. 18 show hosted by Paul Rudd.