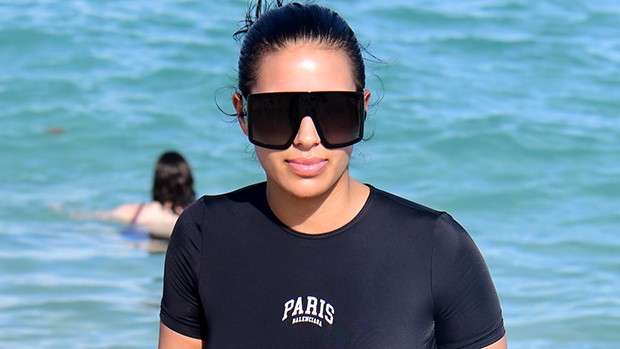 Kanye West’s latest fling, Chaney Jones’, new Instagram photos are very reminiscent of ones that we’ve seen Kim Kardashian post in the past.

The resemblance to Kim Kardashian is uncanny in Chaney Jones‘ latest Instagram photos. In the images, which Chaney posted to her IG Story on March 8, the 24-year-old is wearing a sporty black crop top along with super tiny black bikini bottoms. She’s taking a dip in the water, with her body soaking wet as she emerges from the clear lagoon. In one image, Chaney is pulling on the strings of her bikini bottoms as she looks down with her hair slicked back.

The shots are extremely reminiscent of photos that Kim posted to her own Instagram in April 2021. In Kim’s shots, she’s wearing a black bikini with gold necklaces. Her whole body is also soaking wet as she posts hip-deep in clear water. Kim also looks down and grabs the sides of her bikini bottoms in one of the images, and her hair is slicked back in the same way as Chaney’s.

In May 2021, Kim posted another series of photos wearing an outfit very similar to Chaney’s, as well. Kim’s tiny, white bikini bottoms are paired with a sporty red crop top, with her hair cascading down her back. Fans have noticed that Chaney’s style is a lot like Kim’s ever since she was first linked to Kanye West at the end of February, and the looks just keep getting more and more resemblant!

The exact status of Chaney’s relationship with Kanye is unclear, but he was photographed getting pretty handsy with her as they boarded a plane in Miami together earlier this month. Their romance came following his six week fling with Julia Fox,