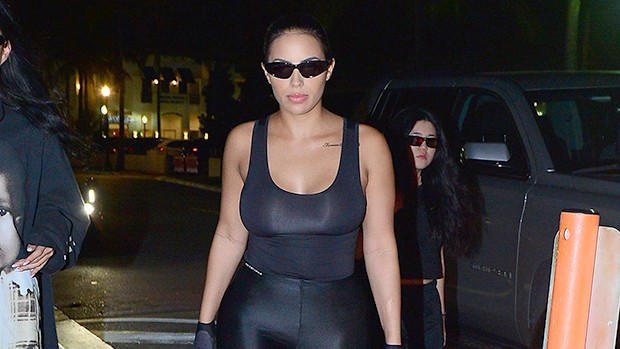 As Chaney Jones continues to spend time with Kanye West, she’s also dressing more and more like Kim Kardashian! Her latest look –for a night out in Miami — had her looking just like the reality star.

Chaney Jones could’ve easily been mistaken for Kim Kardashian when she arrived at Carbone in Miami on Feb. 27. The 24-year-old wore high-waisted, tight black pants and a simple black tank top tucked in. She paired the look with knee-high black boots and wore sunglasses, despite the fact that it was nighttime. This is a trend that Kim began favoring in 2021, and Chaney appears to be picking up on it! To complete her look, Chaney also wore black gloves and had her hair slicked back into a ponytail.

Chaney Jones out in Miami. (MEGA)

The social media influencer has been spending quite a bit of time with Kim’s ex, Kanye West, lately, and fans have definitely noticed her look-alike outfits to what we’ve seen Kim wear in the past. Earlier this month, she rocked a similar all-black look for a night out with the rapper. ‘Ye was also rocking a black ensemble for the outing, so they may even be coordinating clothes already! He pulled similar moves with Julia Fox, who he briefly dated at the beginning of the year before they split in mid-February.

Kim Kardashian out and about on the beach. (SplashNews.com)

As Kanye has been publicly parading around new women, Kim has desperately been trying to terminate and bifurcate their marriage. She filed legal docs at the end of 2021, asking a judge to restore her “legally single” status while she and Kanye worked on the specifics of their divorce settlement.