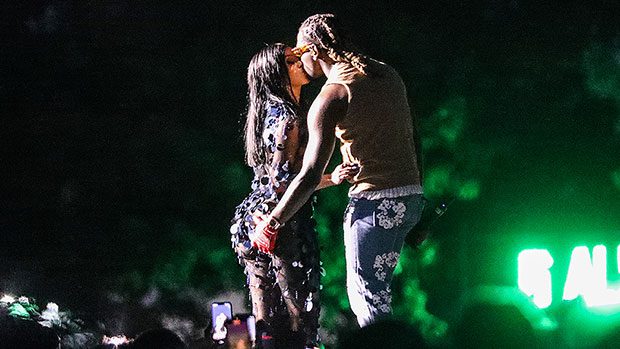 Cardi B and Offset surprised fans with some serious PDA at the Wireless Festival in London on July 8! The 29-year-old “WAP” rapper was joined by her husband, 30, who sang his Migos hit “Bad and Boujee” as well as “Drip”. Afterward, the two leaned in for a passionate smooch, which involved Offset grabbing Cardi’s rear end. Cardi wore a skin-tight black mesh bodysuit for her Friday night performance that featured dozens of extra-large sequins and beading hanging from it. A glittery patch covered her chest. Offset, for his part, donned patterned skinny jeans and an orange sweater vest with nothing underneath.

Cardi B and Offset shared a steamy kiss after they surprised fans in London by performing together at Wireless Festival (Photo: Splashnews)

Following the performance, Cardi took to Instagram to shout out her hubby and Meg Thee Stallion for helping make the opening night of the festival a success. “Let me tell y’all something..WIRELESS LONG ASSS STAGE AINT NO JOKE !!! You need lots of stamina.THANK YOU TO MEGA MILLION MEGAN @theestallion & HUBBINGTON @offsetyrn for rocking with me !!” she enthusiastically exclaimed alongside several videos of her set. At the end of the carousel, however, was a clip from Miley Cyrus’ 2014 Bangerz Tour, during which she declared, “I’m back motherf—kers […] They tried to f—king kill me! I’m not going down without a motherf—king fight!” It is not clear why the “Malibu” singer was included in the post.

Cardi B and Offset are not strangers to declaring their love for one another publicly.