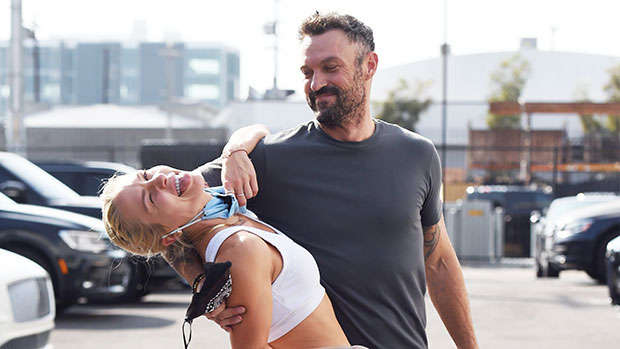 In an absolutely stunning new photo, Sharna Burgess puts her baby bump on display in a white cutout dress while Brian Austin Green lovingly puts a hand on her growing belly.

Sharna Burgess posted a new maternity photo to her Instagram on March 10. The pic appears to have been taken during a recent trip to Hawaii, with Megan and her boyfriend, Brian Austin Green, on the beach as the sun sets in the background. In the photo, Sharna is wearing a white cutout dress, which hugs her growing baby bump at her midsection. Brian is dipping her down and planting a kiss on her lips, while gently cradling her stomach to show off the bump.

News of Sharna’s pregnancy broke during the pro dancer’s Hawaiian vacation with Brian and other family members at the beginning of February. Ever since they returned home from the trip, Sharna has been documenting her pregnancy on social media. This is her first child, although it will be Brian’s fifth — he has three sons with Megan Fox and one son with Vanessa Marcil. Baby number five is also a boy. Sharna revealed her little “peanut’s” sex in an Instagram post in mid-February. She also confirmed that his due date is on July 4.

Brian and Sharna have been together since the fall of 2020. Sharna recently revealed during an Instagram Q&A that they were planning on trying for kids later this year, but she got pregnant while still on birth control in 2021. “The Universe made her own plan, found a window and went for it,” Sharna explained. “We are big believers in everything happening for a reason.