Blue Ivy, 10, Looks Just like Mom Beyonce As She Gets Kiss From Dad Jay-Z At NBA Finals 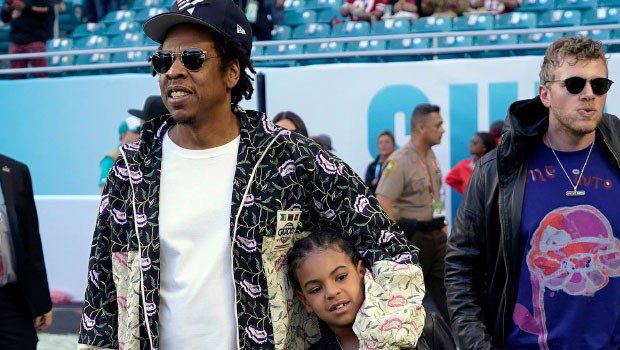 Rapper Jay-Z and his 10-year-old daughter Blue Ivy Carter were seen at game 5 of the NBA finals, and in a clip of the courtside pair, Blue bore a stunning resemblance to her legendary mom, Beyonce! In a short clip, as an announcer enthusiastically welcomed “24-time Grammy Award winner, the only and only Jay-Z,” Blue awkwardly pulled back from her affectionate dad, who put his arm around her and then sweetly kissed her on the cheek. Blue wore her hair down, with a simple pair of hoop earrings and with just a bit of clear lip gloss echoed her beautiful style icon mother. She also rocked a leather jacket, a pair of sunglasses clipped to her shirt, and sneakers.

Jay-Z wore black jogging pants, a black t shirt, and white sneakers on the night out with his oldest child to see the Celtics and the Warriors face off. The appearance was just the latest for the celebrity father-daughter duo, who love to step out together. They were most recently seen enjoying Disneyland in March with Chris Martin, Dakota Johnson, and Apple and Moses Martin, where Blue wore a cute pair of Minnie Mouse ears. They also appeared together at the Superbowl in February and in January, a Rams game.

Jay-Z’s time with his kids is no accident. The rapper has spoken out before about how important it is to support and get to know Blue,