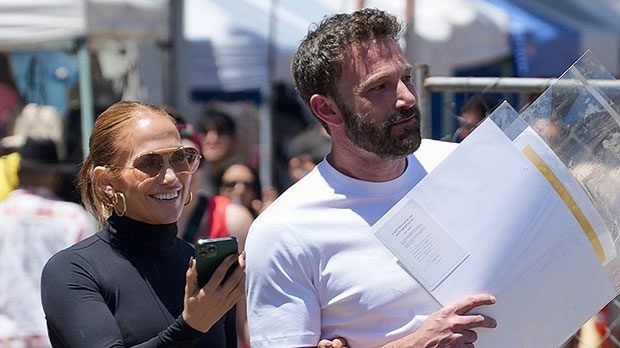 It looks like Bennifer 2.0 is still going strong! Jennifer Lopez and her beau Ben Affleck were seen in Los Angeles at the Melrose Trading Post flea market on Sunday, July 3, 2022.

In the candid photos, the happy couple linked arms while sporting satisfied looks on their faces. J-Lo had on a form fitting black long sleeve shirt and a bohemian style long patterned skirt that reached her ankles. She completed the look with a pair of classy light brown shades and a large chunky solid black handbag. She also had her caramel locks pulled back in a loose bun while she adorned large gold hoop earrings and had her phone in hand. Meanwhile, the Gone Girl star sported a minimalist white t-shirt and khakis.

The engaged couple seem to be going strong, as they were spotted together a mere day before at a Rolls Royce dealership. There, the “I’m Real” singer sported a familiar look with similar brown sunglasses, a loose fitting hairstyle, and a massive purse. Ben kept things simple yet again with a solid gray shirt and bright white sneakers.

Jennifer and Ben first got together when they both starred in the 2002 film Gigli. They got engaged later that year, but then called things off in early 2004. The two both went on to marry and have children with other people.