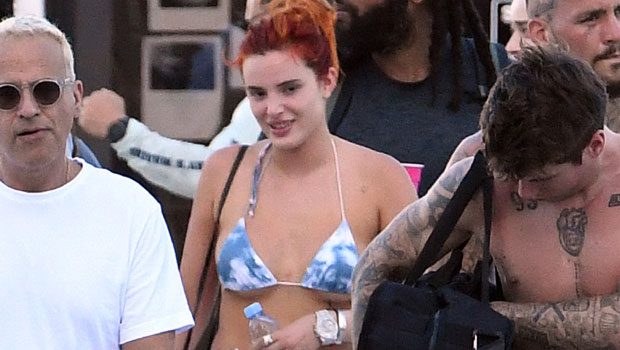 Bella Thorne, 24, has a new man in her life and it seems they’re already super close! The actress was photographed packing on major PDA with a mystery man during a vacation in Mykonos, Greece on Aug. 27. The lovebirds were making out while sitting on a lavish yacht at one point, and appeared to be happy and relaxed. She wore a black tank, white pants, and sunglasses and the hunk wore a white t-shirt, black shorts, and a black baseball cap.

During the noteworthy day, Bella was also seen going for a swim and walking around outside while enjoying the weather. She wore a black one-piece swimsuit and had her hair down as she splashed about in the ocean and flashed several smiles. Her possible new beau also joined her for the swim and went shirtless, showing off his fit physique.

Bella’s latest PDA-filled outing comes after she made headlines for her split from Benjamin Mascolo. The formerly engaged couple parted ways in June and a rep told us their schedules made it hard for them to maintain their relationship. “Bella Thorne and Benjamin Mascolo have parted ways, calling off their engagement of over a year,” the rep told HollywoodLife. “Their conflicting schedules led to a lot of time apart that eventually resulted in the breakup, but the two have parted ways amicably.”

Before the split, Bella and Benjamin started dating in Apr. 2019 shortly after she split from Mod Sun. They went on to announce an engagement on social media in March 2021.