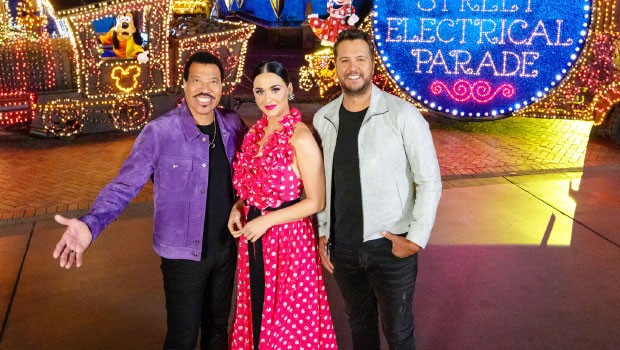 The best night of American Idol has arrived: Disney Night! The night kicks off with the ladies of season 20 performing “We Don’t Talk About Bruno” with Adassa from Encanto. Fellow Encanto star Rhenzy Feliz and the boys of Idol join them in the latter half of the performance. Derek Hough is serving as the top 10’s mentor for Disney Night.

The first contestant to perform is Lady K, who was saved by the judges last week. She performs a sweet rendition of Moana’s “How Far I’ll Go.” Lionel Richie says that Lady K looks and sounds like a star. He notes that Lady K’s growth is “unbelievable.” Luke Bryan admits that he’s “so glad we had the opportunity to save you.”

Noah Thompson sings the Toy Story classic “You’ve Got A Friend In Me” on Disney Night after reuniting with his son and girlfriend. Katy Perry, dressed as Ariel from The Little Mermaid, raves that Noah just showed off some of his “best vocals ever.” Lionel tells Noah that this was the “perfect song choice” for him.

Emyrson Flora wows with her performance of Onward’s “Carry Me With You.” Luke still finds it hard to believe that Emyrson is only 16. He points out that her “comfortableness on stage took it to another level.” Katy Perry tells Emyrson that she loved when the 16-year-old brought her voice down and showed off that “signature Emyrson style.”

HunterGirl dazzles with her rendition of “I See The Light” from Tangled.